Brentford again put QPR to the sword in the west London derby. Here’s how we rated the players in the Bees’ 3-1 victory.

A terrific, instinctive save from a misplaced header by team-mate Pontus Jansson in the 15th minute. Otherwise a fairly quiet afternoon as QPR faded in the wake of the Bees’ thrilling first-half showing.

Was tasked with keeping Ebere Eze quiet. And the experienced Danish international did so with ease.

Did very well to power forward and set up an aerial assist for Ollie Watkins’ third goal before the break. Brentford’s summer signing looked solid alongside Pontus Jansson.

Overcame a few initial nerves and restricted in-form Nahki Wells for the vast majority of the game, despite the R’s striker netting a consolation.

Always alert to the potential danger of Bright Osayi-Samuel and never gifted the QPR winger any room to roam. An assured display.

Did a good anchoring job in the Brentford midfield and won the battle against Luke Amos. Also made a number of important interventions in the engine room with QPR occasionally threatening on the counter attack.

An imaginative, short free-kick to set up the second goal for Bryan Mbuemo. Floated in another set piece from the left for goal number three. A player growing in confidence under boss Thomas Frank.

Worked hard and tracked back constantly even with Brentford on cruise control. Some neat link-up play with Henry, opening up the slack R’s defence.

Tucked home a lovely finish to open the scoring on 23 minutes following a neat free-kick by Jensen. QPR couldn’t cope with his movement for large spells. Outstanding.

Very lively early on, with sublime touches and a close-range shot that went just wide. Added a simple third goal – a header from a couple of yards out in a superb first half. Blazed a late shot across goal but otherwise another fine display for the converted forward.

Committed to the job of nullifying the driving left sided threat of Ryan Manning and maintained his great form.

If Lumley’s place wasn’t already under threat, it must be now. A misdirected clearance early on set the tone for a worse one that picked out Norgaard and led to Brentford’s second goal.

As always, Kane got forward to good effect but he looked thoroughly uncomfortable against the dangerous Benrahma and was booked for chopping the winger down in the second half.

The Rangers captain did find himself turned by both Watkins and Benrahma, but attempting to hold that flimsy back line together was always likely to be something of a thankless task.

Boss Mark Warburton’s decision to deploy Cameron in the back four was a mistake that he tried to rectify at half-time – by which time the American’s shambolic defending had cost his side dearly. He did well in midfield in the second though.

The Irishman’s first-time cross that almost made Jansson put through his own net was an absolute beauty – but his defensive limitations were exposed again for Brentford’s first and third goals.

The midfielder’s passing was spot on as Rangers began brightly and he kept working to set up an opportunity for Ilias Chair, as well as playing his part in Wells’ goal.

Although there were some confident touches from Ball in the opening quarter of an hour, he was unable to impose himself and made way for Conor Masterson at the interval.

Anonymous for much of the first half, a poor touch let Osayi-Samuel down when he chased a one-on-one with Henry – and the winger also scuffed a chance wide with 15 minutes to go.

Early signs of promise faded for Chair, who produced some incisive runs, but he should have done better with an opening late in the first half and made way for Mide Shodipo 10 minutes from time.

Unsurprisingly, Eze represented Rangers’ main attacking threat and also tracked back when required to do so. However, he wasted a chance to pull it back to 3-2 by stabbing a close-range effort straight at Raya.

The centre-forward worked hard, putting pressure on Raya that almost resulted in a goal and deservedly got on the scoresheet by tapping home Osayi-Samuel’s cross to make it 3-1 on the hour.

The young defender came on at half-time and – aside from allowing Watkins to escape him for a header that flew just over – put in a solid performance to ensure a clean sheet in the second period.

Hugill came on in a straight swap for Wells with 20 minutes to go, but saw very little of the ball and certainly never looked likely to spearhead an improbable comeback. 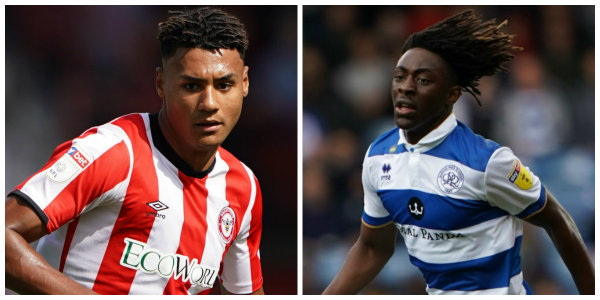