QPR remain unbeaten this season courtesy of Grant Hall’s late equaliser against Huddersfield. Here’s how we rated each Rangers player in Saturday’s 1-1 draw.

Produced a couple of first-half saves and was generally solid. Has responded well to the importance boss Mark Warburton places on his keeper’s distribution.

Solid enough, but hesitant on the ball and faces a real threat to his place from the more dynamic Todd Kane, who came on for him in the second half.

Rescued a point for Rangers with his 83rd-minute header and was always composed at the back. An encouraging start to the season for the new captain.

Conceded a penalty and was caught out a couple of times, but overall he performed pretty well and his distribution from the back is an asset.

Beaten a couple of times in the first half but was a threat at the other end of the pitch. Loves an early cross and tested Huddersfield’s defence numerous times. In the end it was a long, floated free-kick from Manning which led to QPR’s goal.

Had an excellent game in the centre of the park. Firm in the tackle and always useful on the ball.

Played his part in a hardworking team performance but his passing can be hit and miss.

Unspectacular but reliable before being substituted in the second half.

A frustrating afternoon for the winger. His touch let him down several times and he was well contained by the visiting defence. But he did go close to scoring with a second-half strike that went inches over.

Exciting to watch and was unlucky when a goal-bound shot struck Terriers defender Tommy Elphick. Also saw an effort saved in the first half.

Led the line well but few chances came his way. An off-balance header well wide from a Rangel cross summed his day up.

Warburton showed faith in the youngster by choosing him to send on when Rangers were chasing an equaliser. Chair justified the decision, having a shot saved and teeing up Eze. Encouraging stuff.

Lively on the right after coming on for his debut, while Nahki Wells lifted the crowd and added some energy up front in the closing stages. 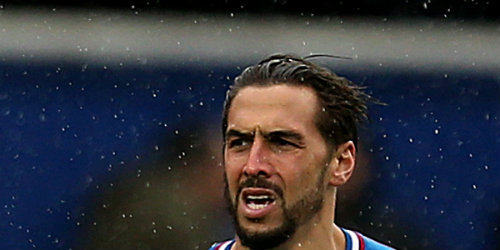