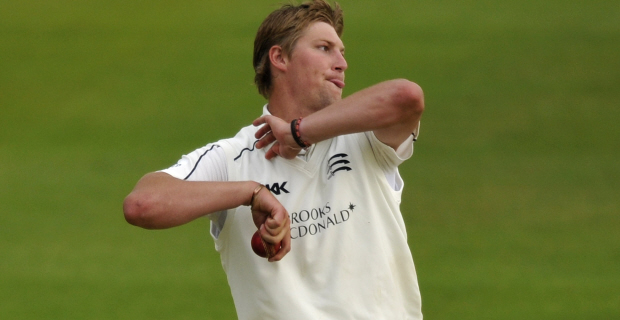 Ollie Rayner chipped in with bat and ball but was overshadowed by half-centuries from Michael Carberry and Sean Ervine as Hampshire recovered on day two at the Ageas Bowl.

Rayner made 26 and shared in a stand of 55 for the eighth wicket with Toby Roland-Jones (39) as Middlesex were bowled out for 356.

The off-spinner then collected the wickets of Jimmy Adams and Liam Dawson to leave the hosts 113-3, but Carberry and Ervine put on 93 to steady the ship.

Roland-Jones’ cameo was ended by Brad Wheal, who finished with 4-98, while Liam Dawson pinned Rayner lbw.

In reply, Hampshire opener Carberry – making his first Ageas Bowl appearance in the Championship since being diagnosed with cancer last June – put his side into a strong position.

The veteran showed off his attritional side, wearing down Tim Murtagh, Steven Finn and Roland-Jones, allowing Adams to take the lead in an opening partnership of 57.

Adams then got a regulation edge to a delivery from Rayner, who later held on to a catch off James Franklin to see off James Vince for just eight.

Carberry’s 50 came from 154 balls, though he did come out of his shell to unleash a big pull shot off Murtagh which slammed into the advertising hoardings.

Dawson was also cautious in scoring 19 and was out to the last ball before tea, adjudged to have tickled one behind off Rayner.

Zimbabwean Ervine upped the tempo with a 70-ball fifty until Finn returned to the attack with six overs left in the day to make him play on, with Hampshire just 148 in arrears at stumps with six wickets remaining.