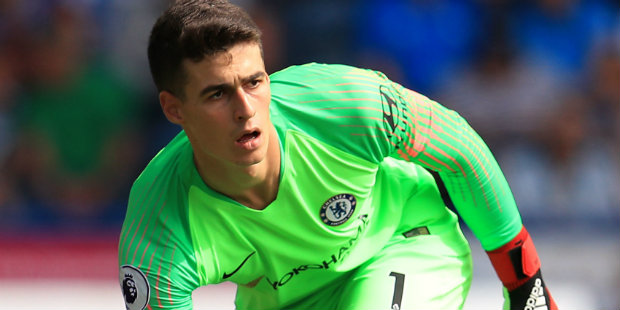 Maurizio Sarri insists Kepa is still very much Chelsea’s number one goalkeeper despite being left out against Tottenham.

The Blues breathed new life into their season – and eased the pressure on head coach Sarri – by beating rivals Spurs 2-0 at Stamford Bridge to stay in the chase for a top-four finish and a return to the Champions League next season.

There could be another route – a favourable Europa League draw pitched them against Dynamo Kiev, and considering that Chelsea aren’t competing to win the Premier League, the Blues can focus their strengths on the Europa League; where they remain 7/2 favourites according to most betting sites via Mytopsportsbooks.

Kepa was dropped against Spurs for refusing to leave the pitch when Sarri wanted to replace him during Sunday’s Carabao Cup final against Manchester City.

But Sarri replied “of course” when asked after Wednesday’s win if he still regarded Spain international Kepa as his first-choice keeper.

He also revealed that Kepa will soon be recalled to the side and that the matter is now seen as “finished”.

Pedro’s goal early in the second half and a comical own goal by Kieran Trippier gave Chelsea a priceless victory.

“It was really very important because we’re fighting for the top four,” said Sarri.

“I don’t know but I think maybe with this result we could involve Tottenham in this fight. The gap is very large, seven points, but we have one match [in hand].

“The level of application and level of attention is higher than before and I think the level of aggression is different now.”

Sarri also suggested that reports he faced the sack had Chelsea lost were “maybe not true” and that he has not been fazed by speculation over his future.

“In this job you are under pressure every week, if you’re lucky every six months. It’s normal,” he said.

“If you lose two matches, three matches in a row you’re under pressure. I think it’s normal for every coach, maybe something more in Chelsea.”