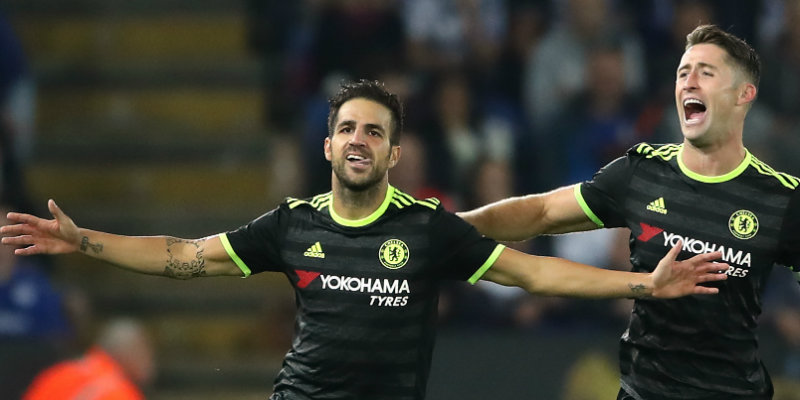 Chelsea came back from 2-0 down to beat 10-man Leicester and take their place in the fourth round of the EFL Cup. Here’s how we rated the Blues players in their 4-2 victory at the King Power Stadium.

Made a couple of decent stops and one awesome save to keep out Ahmed Musa’s chipped effort when the score was level at 2-2. Should have been more decisive for the opening goal but had no chance with the second.

Scored a magnificent goal to draw Chelsea level, a strike he would never have managed had he been following up on left side. It was just his fourth for the Blues – in a game where he unsurprisingly looked so much more comfortable playing on the right. The Spaniard as able to contribute in attack as well as do his defensive duties.

The debutant made a steady start and provided balance and a calmness throughout, but did not look totally sharp and that was clear in some of his decision-making as well as his execution. Surrendered possession cheaply in the build up to the first goal but encouraging enough for a first start.

The stand-in captain scored a fine goal and defended the ball well but needs to take more a leadership role when deputising for John Terry. He was not helped by playing in a new-look back four but collectively the rearguard looked shambolic at times.

Individually did fine in defensive situations and looked excellent in possession. He played four wonderful long passes out of defence which could easily have led directly to goals – notably a glorious ball to Diego Costa. The Brazilian’s ability on the ball adds a new dimension to Chelsea’s attack but he almost spoiled his performance when he made a rash attempt to win a header and Ahmed Musa almost scored.

Hit-and-miss stuff from the big midfielder who is clearly getting around the pitch more this season but is not always using the ball well enough. But his effort could not be questioned and he is the man to pay the price for the inclusion of Fabregas in midfield. N’Golo Kante’s absence is a big loss to the team, but an ever bigger loss to the Serbian.

Rounded off a magnificent team move to score a lovely goal and make it 3-2 and quickly followed that up by crashing in a second to wrap up the victory. Was at the heart of Chelsea’s best moves and, although he was caught out defensively at times, it was still a fine performance.

The winger played selflessly and sensibly, picking out team-mates rather than trying to do too much. He showed why he has forced his way into the first-team reckoning this season with a smart display that stuck to the gameplan and was full of running and awareness. Justified the manager’s trust in him.

Showed some neat touches and took up some intelligent positions but could not quite impose himself on the game. Had a couple of attempts blocked and provided energy and a threat as the main support man to Michy Batshuayi.

Direct and dangerous, the Spaniard posed problems throughout and created numerous half-chances. Marred his performance with a poor clearance that led to Leicester’s second goal, but otherwise impressed.

Almost scored with a fierce long-range strike and was always a threat. He did okay holding the ball up, but Diego Costa’s introduction definitely gave Chelsea something they had been lacking.

Changed Chelsea’s whole outlook after coming on, charging around and bringing energy and greater purpose and a constant treat in behind. Should have scored at least one, and could easily have scored four. Was superb in his 50 minutes on the pitch.

Played within himself, but when the opposition were reduced to 10 men he was way too good for the opposition. Retained the ball, used it effectively and always looked like he could go through the gears if he wanted.

Did himself no harm after coming on for his debut. Looked good in possession – albeit against 10 men for much of his time on the pitch. The midfielder was comfortable and untroubled.