Kai Havertz: Will he be Chelsea’s magic man or an expensive illusion?

Is record signing Kai Havertz about to prove his worth and magical ability after a testing and Covid-affected start to his Chelsea career?

West London Sport looks at the generational talent who is showing signs of losing his cloak of invisibility as he treads a similar path to German team-mate Thomas Müller.

It was quite the sight watching Kai Havertz strut his stuff against Everton.

The 21-year-old looked back to his imperious best – gliding over the turf, caressing the ball gracefully, pirouetting away from pressure and elegantly running at the Everton backline.

After playing a key role in both goals, most Chelsea fans can be forgiven for feeling as if the club’s record signing has finally found his feet.

But then there are games in which Havertz’s magic, like most magic, feels like an illusion; near invisible.

Against Leeds, he looked ineffectual in the same position he had run riot in against Everton.

He missed two golden chances from two gorgeous Hakim Ziyech passes. He had just one key pass all game, while N’Golo Kante had three times as many from a more conservative role.

Off the ball, he made a solitary tackle and no interceptions; concerning reading for a “false nine” in a high-pressing side.

Puzzlingly, he also attempted no dribbles, no crosses and no long balls. But against a relentless opposition that offered no time or space, Havertz managed four shots on target, more than the whole Leeds side combined.

Even when he’s invisible, Havertz makes his presence felt. But the question for every Blues supporter…is it enough?

A testy start and a positive Covid test

In Havertz’s defence, it has been anything but easy since his arrival at Chelsea as their most expensive ever signing.

Any hopes of stability were rocked as Frank Lampard was sacked halfway through the season, with many believing one of the reasons for his acrimonious exit was the failure to bring the best out of German stars Havertz and Timo Werner.

If that wasn’t enough to deal with, in addition to moving to a new country with such lofty expectations, Havertz experienced a severe case of coronavirus that left suffering from severe headaches and bedridden for days.

Although doctors recommended a four-week rest, Havertz was back after less than three.

But during several games after his return he looked a yard off the pace, struggling to leave his mark.

Following his return from illness up until the Everton match, Chelsea won just one out of five games he started, losing three and drawing the other.

In his 12 appearances since, he’s only contributed one assist.

Rotation and a change in position also made (and continues to make) it hard to find the right rhythm.

In his past four league starts the former Bayer Leverkusen star has never played with the same attack twice, while Chelsea’s defence has benefited massively from a consistent selection under Thomas Tuchel. 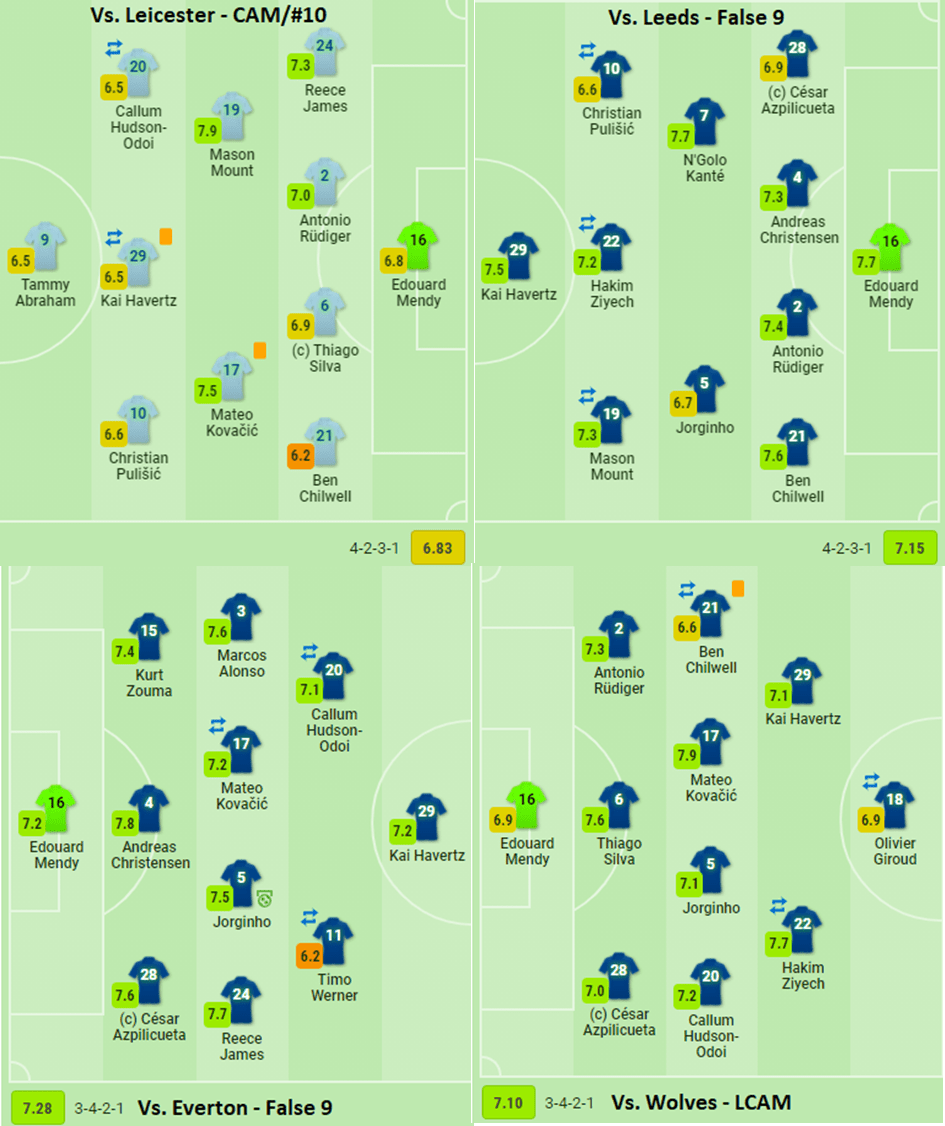 In essence, almost everything that could go wrong for a young talent taking a massive step up in his career, has done.

He’s been written off by many already but that feels premature. After all, how can he be finished if he hasn’t even begun?

Unbeknown to many, Havertz has been here before.

In his early years in his hometown of Aachen, he rapidly progressed through youth football, sometimes playing against players several years his senior.

But between the ages of 14 and 15 he struggled after experiencing a growth spurt that transformed his body into his current long-limbed, willowy frame.

“I had to get used to my legs being longer,” he told the Bundesliga’s official website.

“It affects the whole way you play football. There was definitely a bit of a struggle, especially at U15/16 level. I wasn’t starting as many games – spending more time on the bench.”

But despite having to grasp the dynamics of his body all over again, Havertz roared back into form, helping Leverkusen Under-17s win the title by scoring 18 goals in just 26 games.

This proves there are reasons to be optimistic that Havertz can use his experience in the past to emerge stronger than ever before.

Like all things German, the Deutschen lexicon is just as efficient as it is impressive.

The term Alleskönner (someone who is able to do everything) is a word that has been synonymous with Havertz.

However, there is an equally interesting quote famously attributed to Albert Einstein – admittedly not always the first port of call for a football reference, but this is relevant.

“If you judge a fish by its ability to climb a tree, it will live its whole life believing that it is stupid.”

It is a saying that perfectly highlights the dangers of placing such a heavy burden on such slender shoulders.

Expecting a young talent to be exceptional at everything may prove to be counterintuitive altogether, especially in an industry where the “generational talent” tag changes so frequently.

So how exactly does one escape the tag of being a generational talent, or the crippling demands of being an Alleskönner?

For a definitive answer, Havertz can look to another German talent Thomas Müller who broke into the limelight as a 19-year-old, who has since made his entire career out of the art of being invisible.

Even the German lexicon struggled to accurately describe his talents until he did so himself, with the now famous phrase – ich bin ein Raumdeuter (a space interpreter).

The similarities between Müller and Kai Havertz are uncanny.

Both had their breakthrough seasons at 20, impressing with an astounding array of brilliance.

Havertz is an inch taller than Müller, but both players have been unfairly ridiculed for their physical characteristics.

While Havertz has regularly been criticised for the almost lazy elegance with which he gets around the pitch and for a lack of visible aggression, Müller’s awkward running style and inability to beat defenders in duels came under fire.

In his book Pep Guardiola: The Evolution, Martí Perarnau wrote, “Müller has lost more balls than any other Bayern player over the past two-and-a-half years.

“He doesn’t dribble particularly well and he’s never been the fastest guy.

“His headers are unexceptional and he could use some work on his shooting.

“He loves to press but often does so with his head turned towards his own team-mates. And yet this is a prodigiously talented footballer.”

His goalscoring was attributed more to fortune than to skill.

Müller’s decision to invent his own identity as a Raumdeuter finally helped define his sense of positional awareness and instinctual understanding of space – which he attributes to watching basketball – two qualities that cannot be quantified by stats.

Honigstein describes it as “his clever, unashamedly inelegant art of stabbing the ball home from unlikely angles with unlikely parts of his head or legs.”

What Müller has succeeded in doing so brilliantly as an inimitable talent is to carve out his own niche instead of conforming to any labels that the press, pundits or analysts have tried to stamp upon him.

Havertz would be wise to choose a definition that he is comfortable with; whichever German word he chooses to do so will nevertheless be fascinating.

With Mason Mount suspended against Atletico Madrid, who also have their defensive lynchpin José Giménez back fit for the return leg, the Blues could find the Spanish side very hard to breach.

Havertz could be the special key the Blues need to unlock the resilient La Liga leaders, and reach their first Champions League quarter-finals since the 2013-14 season.

If the gifted German can combine his ingenuity against Everton and his industry against Leeds on a consistent basis, Chelsea could well have the enigma they fought off multiple European superclubs to sign last summer.