Pedro has played his final game as a Chelsea player and is set for move to Italian side Roma. Here are just five of the popular Spanish winger’s most memorable moments during his time at the club.

Pedro arrived from Barcelona in the summer of 2015 and made an instant impact, scoring on his first appearance for the club in a thrilling 3-2 win over West Brom at The Hawthorns in August.

He played a one-two with Eden Hazard and showed the neat control and the quick feet that has become his trademark by creating a tiny bit of space in the box and somehow getting a shot away.

It was helped on its way by a deflection, but it mattered not a jot to Pedro who put Chelsea 1-0 ahead and on course for victory. 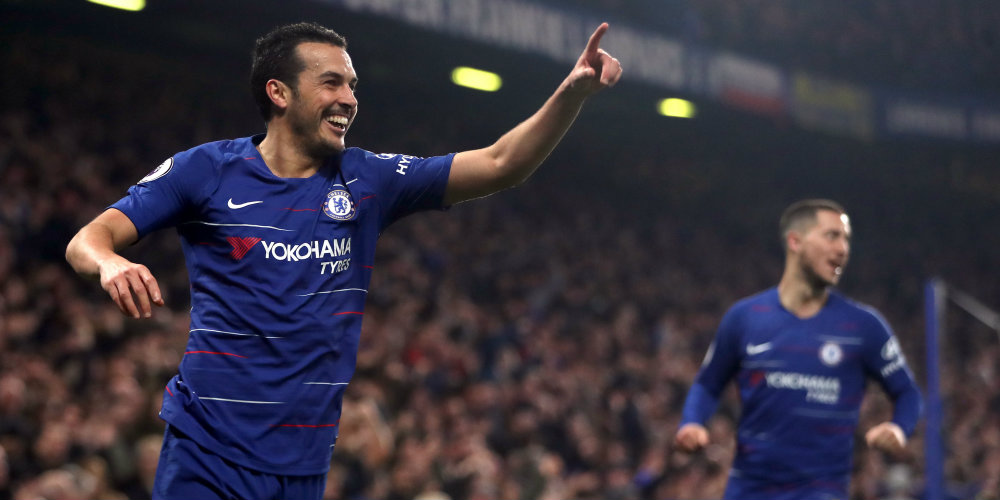 Is there a better way to ingratiate yourself with the home fans than by scoring inside 30 seconds against a Manchester United side managed by Jose Mourinho?

Pedro tested the the theory with what is possibly the most memorable goal of his Blues career in a thumping 4-0 win in October 2016.

After Chelsea kept possession at the back for a few seconds the ball was played forward and Pedro took full advantage of defensive hesitation by nipping in behind the United defence, taking the ball wide and neatly slotting into an empty.

Jose’s face was a picture.

The next significant Pedro Rodriguez moment came in game eight of Chelsea’s 11-game winning streak that proved so crucial in the championship success.

Pedro’s third league goal in his previous six matches was one of 13 in 45 matches in all competitions and came in late November 2016.

And it was another beauty. Tottenham were ahead and looking strong with the half-time whistle moments away when a Cryuff turn by Pedro made him just enough space to curl home a wonderful shot into the far corner.

With momentum gained, Diego Costa teed up the second for Victor Moses after the break and that was good enough for the points.

A pearler at Goodison Park

As pressure mounted as Chelsea looked to keep ahead in the closing stages of the Premier League title race of the 2016-17 season, a tricky test away against Everton was next on the agenda.

With less than 25 minutes remaining and the game still goalless, Pedro eased the increasing nerves with a pearler of a strike.

The Spaniard controlled a pass 30 yards from goal, turned sharply and smashed the ball into the corner. Two more goals followed to ensure an emphatic away win and the title felt as good as won.

My last game at Stamford Bridge. Thanks to every fan for your support through this years, to the club for giving me the chance of being a Blue and to my teammates. You’ll be in my heart forever. Now let’s fight for FA Cup trophy!!! BIG BLUE FAMILY 👏🏻💙🔝 @ChelseaFC #CFC #KTBFFH pic.twitter.com/vwFKmnWfbx

Pedro played a significant role in Chelsea’s second Europa League victory, scoring five goals in the competition which was won with a memorable pasting of an outclassed Arsenal side in Baku.

He saved his best til last, with a brilliant performance in the final.

Pedro scored the vital second goal with a well-directed finish across goal and then played the ball which saw Olivier Giroud win the penalty that was subsequently scored by Hazard to make it 3-0. Glorious.

Happy 33rd birthday and thanks for the memories Pedro.