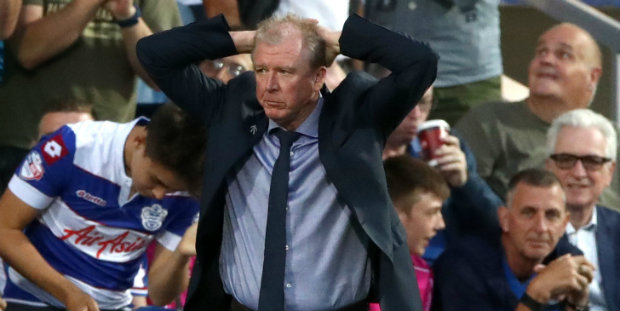 QPR fans turned on Steve McClaren as his beleaguered team were crushed again.

Matty Taylor’s goal four minutes before the interval put Bristol City ahead and Andreas Weimann doubled their lead five minutes into the second half.

Weimann netted again in injury time – the Austrian’s fourth goal in as many league games since his arrival from Derby County.

Rangers, bottom of the Championship and walloped 7-1 by West Brom on Saturday, have lost all four of their league games since McClaren replaced the sacked Ian Holloway as manager.

Their shortcomings in defence were all too evident once again.

Taylor opened the scoring when he collected the ball near the right-hand touchline and was inexplicably allowed to score from a tight angle.

He got the better of Jake Bidwell, who slipped, before firing through the legs of Alex Baptiste and past keeper Matt Ingram, who should have done better.

QPR’s defending for the second goal was arguably even worse.

Niclas Eliasson sent in a cross from the left and Weimann, totally unmarked, nodded past Ingram.

Josh Brownhill set up the third, retrieving the loose ball after he had been denied at point-blank range by Ingram and pulling it back from the right for Weimann to score with ease.

Rangers had made a decent start and Conor Washington had a chance to put them ahead.

Recent signing Angel Rangel, making his debut, crossed from the right and the ball dropped to Washington, who turned away from Jack Hunt but fired straight at keeper Niki Maenpaa.

Earlier, the hosts were presented with an opening when Maenpaa’s clearance fell straight to Massimo Luongo, who teed up Ebere Eze. Maenpaa stoned by gathering the young forward’s shot.

However, Rangers always looked fragile at the back and before going behind they had a major let-off when Eliasson side-footed a volley over the bar after being found unmarked by Taylor’s right-wing cross.

There was no escape for McClaren’s side when Taylor again found space on the right and this time helped himself to a goal.

McClaren was then barracked by some of the home supporters as he made a double substitution on the hour mark, bringing on Matt Smith and Jordan Cousins for Pawel Wszolek and Luongo.

Washington created a great chance for Rangers to pull a goal back at 2-0 when he burst through on the left, rounded Maenpaa and squared the ball to Eze, who hesitated and saw his shot blocked by Adam Webster.