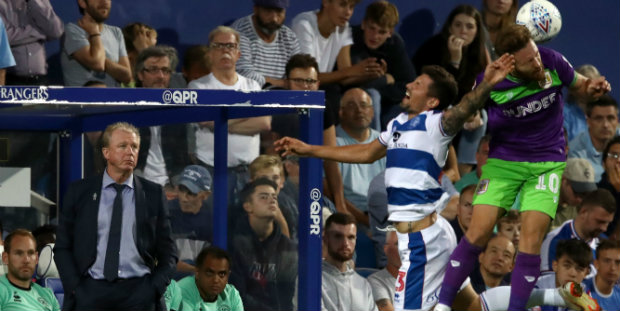 It was another miserable night for QPR fans, some of whom jeered Steve McClaren after a fourth defeat from four league games since he took over as manager. Here’s how we rated each of his players in Rangers’ 3-0 defeat against Bristol City.

Kept out a Josh Brownhill strike from distance, but beaten by stinging low shot across him from an angle. Blamelessly beaten by a close-range header before defensive cover vanished altogether late on.

Reasonably encouraging debut for the former Swansea man, who at least gave Rangers the hope of better defensive days. Sacrificed for Idrissa Sylla on 77 minutes as R’s chased the game.

Gave Rangers a more solid look in the first half – which would not have been difficult – but still unable to get in the way of Matty Taylor’s strike, which sapped confidence.

Maybe at fault for failing to cut out the cross which brought City their second goal and often looked vulnerable on the deck.

Unfortunate slip allowed Taylor to wriggle past him and drill in City’s first goal. Unable to venture forward as effectively as he can or put in any telling crosses.

A dangerous run on goal following a fine Luke Freeman pass, but was crowded out. Did not get into the game much. Replaced by Matt Smith on the hour.

Almost on target with a fine overhead kick following a corner and was never afraid to hunt the ball. Made some good tackles and showed an appetite for the task, but controversially replaced by Jordan Cousins on the hour.

Became more of a force as the game progressed, flashing a couple of efforts wide from range. Industrious against his former side and never threw in the towel.

Had a free-kick from outside the box comfortably saved, but not the imposing presence he can be.

Always a willing runner, pressuring the City defence. But should have opened the scoring in the first half when found in space inside the area, only to roll his shot too close to keeper Niki Maenpaa.

Early turn and strike lifted home fans in need of a boost after the West Brom horror show, but he was too quiet for spells in the match. Missed a glaring opportunity after Washington had scampered to the byline to put in an inviting cross.

Flashed a header over the bar after coming on.

Could not spark the revival needed by McClaren, who was barracked by some fans when bringing him on.