After Rodney Marsh and Stan Bowles famously graced the QPR number 10 shirt in the 1960s and 1970s, Simon Stainrod swaggered in it during the first half of the 1980s.

Signed from Oldham for £275,000 in November 1980 by Terry Venables, the Sheffield-born forward was one of the stars of an excellent Rangers side that went from FA Cup finalists as a Division Two outfit to finishing fifth in the top flight and playing in the Uefa Cup during a memorable three-year period for the club.

Stainrod started his career at Sheffield United but it was at Oldham where he made his name before moving to west London to play under Venables after turning down the chance to sign for Chelsea.

In a stellar five-year spell at Loftus Road the swashbuckling Yorkshireman went on to score 49 goals in 138 games.

“I was in the office of Chelsea manager Geoff Hurst speaking about about moving there but once I’d chatted to Terry Venables, it was a case of this is someone who knows what they are on about,” Stainrod told West London Sport.

“So the decision to sign for QPR wasn’t that hard to make.”

While Dave Sexton’s side of the 1970s is regarded as the greatest in the club’s history, the one created by Venables containing the likes of Stainrod, Tony Currie, Clive Allen, Terry Fenwick, Gary Waddock, John Gregory and Glenn Roeder deserves to be held in high regard too.

Venables, who quit a top-flight Crystal Palace to drop down a division, made Stainrod one of his first signings, persuading chairman Jim Gregory to fork out £275,000 for the confident 21-year-old, who remembers being hugely impressed by his new boss.

“You were convinced he knew everything about coaching and knew he’d done his homework on the opposition,” Stainrod said.

“He’d have put a plan together on the Monday after the last game and by Friday we all knew what the team was going to be because we’d spent the week working on the game plan.

“He developed ways of playing against different teams. For example, Man United at the time were very hard to play against because their defence used to sprint out to the halfway line, so as a striker you were always running back to your goal.

“If you’re comparing us to a style now, it’s similar to how Man City play – we used to keep the ball and be very patient.

“Remember, we were playing against the likes of Liverpool, Man United, Spurs and Arsenal, who were all good teams at the time, so we had to do a lot of defending and Terry had our defensive system down to a tee.

“Teams used to complain about us playing offside but we used to squeeze the play at the right time and hold a good line. Terry Fenwick and Steve Wicks would lead the line and were so well drilled.”

Although discipline and shape were very much part of Venables’ training sessions, Stainrod said monotony was never an issue and the team spirit among the squad was the best he experienced in his career.

“With Terry, because we felt we were progressing as players the atmosphere was great,” he said.

“We used to like each other’s company, training was always interesting and competitive and never boring. You always felt you were learning something. He gave me an education and that has stayed with me even now.

“I think I have pretty good eye for a player who can make a difference at the top level in my job now as an agent, and that came from working under Terry.”

Although the prospect of playing under Venables was a huge incentive to move to QPR, Stainrod says wearing the number 10 shirt was the biggest lure.

“I used to clean TC’s boots at Sheffield United and he was a very strong man and he could really hurt you, but I think he quite liked the fact I took the stress away from him by being the QPR 10!”

Although attention to detail was key to Venables’ coaching, allowing players to express themselves on the pitch helped Stainrod thrive at QPR and hearing first-hand from one of Bowles’ former team-mates about what made him tick was key to his development as a crowd favourite at Loftus Road.

“Stan Bowles was my hero as a kid and playing for QPR is everything for me, because I wore number 10 and that was his shirt,” he said.

“I remember Terry saying to me that although Stan liked to give off an image of just turning up and playing, no-one worked harder in training than him.

“He played in the same team with him at QPR and saw him day in day out and said Stan was always the first one in to training and the last to leave and was constantly working on his finishing and crossing, and that really stuck with me.”

Stainrod is now based in France and has run his own player agency for over 20 years. Although he is still involved in the game on both sides of the Channel, he insists his era deserves more respect.

“For my players of my generation there are the odd bits on YouTube, but I scored a few worldies in my time that have never been seen and it would be nice to see a few whenever I like,” he said.

“It is the only thing I am jealous about with modern players, because everything they do, good and bad, is documented everywhere.

“But it does my head in a bit, the mentality that football was invented by Sky TV.

“I know lot of what has come from Sky being involved in football is good.

“You never knew what you were going to get when we played away, it could be muddy, bone dry or frozen.

“But I do think there are a lot of good things that aren’t there any more.

“I was at a game in France last week and each team had five subs and in the second half the game just petered out, it was just hopeless.

“The big thing for us at halftime when we played with just one sub, was deciding which player had the worst injury and had to come off.

“I just think that courage, determination and character from players now is sometimes not there any more.”

“They say now that players are quicker and faster, but you can only be so much quicker, and the way that modern-day TV is these days it makes the game look quicker.

“When we were televised we probably had two cameras at a game, so it looks slower, and you also had the pitch conditions to take into account.

“A player like Eddie Gray would take players on for Leeds United for fun, and he had perfect timing and control. If he played today he could do it wearing a blindfold.

“Football has gone down a very athletic route, with data and analysis for everything, but at the end of the day, the teams with the most technical players win the trophies.

“The game has changed. I preferred the old game and I am not jealous playing in this era. I played football to have fun, entertain people.

“I see the Antony at Manchester United, and that trick where he spins around with the ball – it’s great. But he’s criticised for not respecting the opposition. It was the same with Richarlison for Spurs against Forest.

“But why should you respect the opposition? Take the p*** out of them and get on with it! I just wish there was a bit more bravado in the game.”

Stainrod left QPR after a bitter falling out with Venables’ replacement Alan Mullery following the Uefa Cup exit to Partizan Belgrade, where Rangers let slip a four-goal lead to go out on away goals. He moved to Sheffield Wednesday in early 1985.

However, his stint at Hillsborough was brief as Venables tried to sign him for Barcelona, who he’d left QPR for a year earlier.

“I was relatively happy at Wednesday, although Howard Wilkinson the manager was very different to Terry,” Stainrod recalled.

“He was alright though, Howard, and he did get me very fit, but at the end of the season my agent got in touch to say Terry wanted to sign me.

“Venners said to come out with the missus and stay in Barcelona. So we booked a place in the centre of the city, went to a game then met him and the Barca financial director Juan Gaspart, who went on to become club president a few years later.

“Now Dennis Roach, my agent, had already given me the terms and conditions and I’ve verbally accepted it.

“But when we sat down to sign he (Gaspart) had changed everything around and it wasn’t what they initially said, and I felt this fella was messing me around so I just got up and walked away.

“I can’t say I regret it, but I do accept that if you play for Barcelona it really does raise your prestige and where you stand in football.”

Stainrod finished his career in England with a three-year stint at Aston Villa, then Stoke, before moving to France and ending his playing days with a hugely successful spell in Scotland with Falkirk before going on to manage Dundee and Ayr United.

But it is at QPR where he has his fondest memories and this Sunday he will return to W12 for the first time since he was inaugurated into the Forever R’s club in 2018, to recall his days in the number 10 shirt.

“My attitude as a player was: I want to get the ball, show how good I am and if it comes off, it comes off,” he said.

“If it doesn’t, there’s always next week.

“I was in the England squad a few times, but didn’t get a game, so I’d almost fulfilled my biggest dream which was to play for my country and play in the FA Cup final – which I did at QPR.

“To play in a FA Cup final in the QPR number 10 shirt while Tony Currie is on the pitch, now that is something,

“No other English club has a Number 10 shirt that is important like the QPR one and that’s down to Stan Bowles and Rodney Marsh.

“I never usually do these down-memory-lane things and it is well over 30-odd years ago that I played for QPR.

“But I am not going to be here forever so I thought ‘Let’s have a road trip around the places I was popular at, because there are plenty more where I’m not’.

“When I did the Forever R’s thing on the pitch with Andy Sinton, who is a genuinely good lad, it brought a tear to my eye.

“It means more to me than anything, does QPR, because I had the number 10 shirt and Stan Bowles was my hero.” 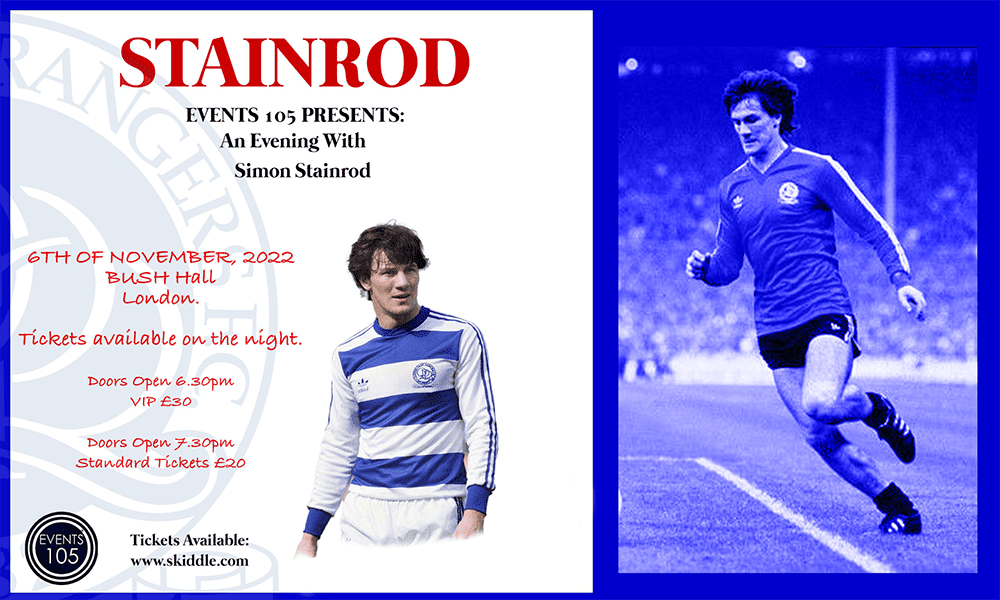