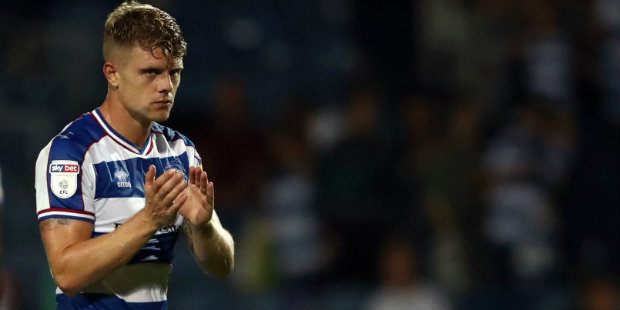 QPR had to settle for a point despite playing most of the match against 10 men after Sam Clucas’ early sending-off.

Struggling Rangers, who themselves ended the game with 10 men after Grant Hall was sent off for a second booking with three minutes remaining, were poor throughout.

Clucas ludicrously got himself dismissed after just eight minutes for stamping on Josh Scowen in full view of referee Gavin Ward.

Scowen followed through with an innocuous sliding challenge just as Ward, who was standing a few yards away, blew for a free-kick after Clucas had handled the ball near the edge of the penalty area.

Clucas inexplicably reacted and was immediately shown the red card.

B​ut​ Rangers, having lost eight of their previous Championship matches and won just once in the league since Boxing Day, were unable to take advantage.

Their miserable afternoon was compounded when defender Hall was shown a second yellow card following a foul on Tom Ince.

Stoke have not won in 21 league visits to London – a remarkable run stretching back to November 2014 – but will regard this as a well-earned point.

But the home side failed to create a clear-cut chance in the first half and were almost punished when Charlie Adam blasted wide after Nahki Wells had given the ball away deep inside the Rangers half.

Stoke continued to look comfortable​ after the interval​, although Butland was called upon to produce a fine save when Rangers finally created a chance of note.

The England international dived to his right to push away Wells’ low shot after the striker had been set up by Scowen.

Rangers failed to seriously threaten again until a brief flurry late on.

Their fans appealed in vain for a penalty when the ball appeared to strike James McClean on the arm as he blocked Tomer Hemed’s header from a cross by substitute Olamide Shodipo.

Butland ​then ​kept out Hemed’s tame header from Jake Bidwell’s left-wing cross to ensure the Potters did not leave empty-handed.

And they might well have left with​ all ​three points had Mame Diouf been able to direct a late header the right side of the far post.