QPR extended their unbeaten run to four matches as they beat Derby. Here’s how we rated each Rangers player in the 2-1 win.

Although his kicking sometimes lacked accuracy, Kelly was generally sound in the air and made important saves to foil Tom Lawrence and Martyn Waghorn during the latter stages of the game.

Often gets forward to good effect but found wanting defensively. This was another such example.

The skipper produced a stunning finish, walloping his shot in off the bar to open the scoring. But some of his challenges, particularly two to halt Jack Marriott, were just as crucial at the other end of the pitch.

The Frenchman is really starting to look like the player Rangers thought they had signed last summer. He read the game efficiently and proved adept at turning defence into attack on several occasions.

Another strong display from Manning, who was involved in the build-up to Rangers’ first goal and produced some superb crosses later in the game.

Visibly growing in confidence, Ball is beginning to impose himself more in midfield – he made some vital blocks as well as pushing forward to join in the attack whenever he could.

Like Ball, the veteran midfielder showed plenty of courage when required to charge down Derby attempts on goal – and also provided the cross that resulted in Rangers’ opener.

Osayi-Samuel’s pace and enthusiasm caused plenty of headaches for the Rams defence and, while the final ball was sometimes missing, he battled hard in an unfamiliar centre-forward’s role for the last half-hour.

Generally a quiet evening by Eze’s standards – but his class came to the fore when he intercepted Wayne Rooney’s pass and set off on a penetrating run to set up the winning goal for Ilias Chair.

Given the slip by Waghorn for Derby’s equaliser, Pugh contributed relatively little on the left flank and he eventually made way for Chair with 20 minutes remaining.

Rangers’ centre-forward had something of a buzz about him, evading Curtis Davies with a nifty turn and setting up a couple of openings for Eze, so it was surprising to see him withdrawn on the hour.

Replacing Hugill for the last half-hour, Clarke immediately created a chance that Pugh failed to finish off – and that was about the sum total of the teenager’s input as Rangers dug in to defend their lead.

Chair’s neat interplay with Eze was impressive and, in terms of making an instant impact, he could hardly have done better than thumping home the winner just two minutes after his introduction. 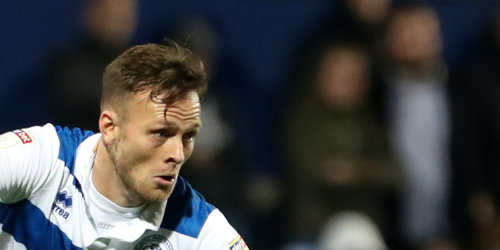