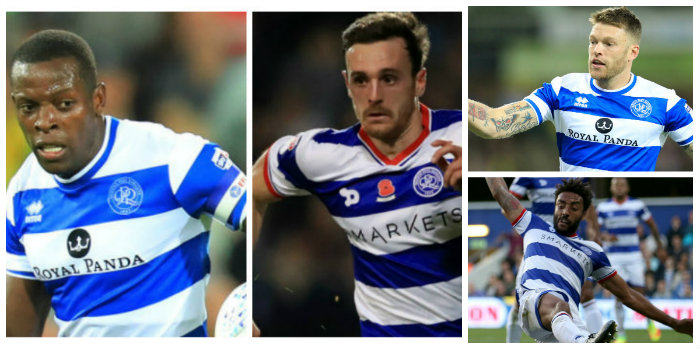 Jack Robinson and Nedum Onuoha look likely to leave QPR along with Jamie Mackie and James Perch, who are being released by the club.

The contracts of all four players expire at the end of the season.

Rangers announced on Friday morning that Mackie and Perch will not be offered new deals and will leave along with Jay Emmanuel-Thomas, and that the club are in negotiations with Robinson and captain Onuoha.

However, both defenders intend to leave this summer.

Onuoha, who moved from Manchester City in January 2012, has indicated that he wants to return north.

And Robinson’s representatives believe they can secure a Premier League move for the 24-year-old based on his performances this season.

Robinson was signed from Liverpool in 2014 and immediately sent on loan to Huddersfield, where he suffered a serious knee injury in March the following year.

He struggled for fitness and form and was made available for a loan move last summer after being told he was not in manager Ian Holloway’s plans.

Rangers’ defensive injury problems early in the season – the likes of Onuoha, Perch and Grant Hall were sidelined – resulted in Robinson, a left-back, being deployed at centre-back.

He has performed well in the role, enjoying an excellent campaign and seemingly boosting his chances of another club signing him when he will be available on a Bosman free transfer.

Onuoha, 31, has made 222 appearances for the R’s and was part of the team which won promotion back to the Premier League with a play-off victory against Derby at Wembley in 2014.

End of the road for Mackie

He became a popular figure during his first stint, playing a significant role in their 2010-11 Championship-winning season and survival in the top flight the following year.

Hampered by injury problems, Mackie has started just 32 league games since his return to west London in 2015 and has not played for the first team since a back operation in December.

Perch, also 32, arrived from Wigan in 2013 and has spent much of this season on the sidelines, having suffered a broken kneecap in August.

Emmanuel-Thomas, 27, has been an outsider for most of his three years at the club. His contract is also about to expire.

He spent last season on loan at Gillingham and has not played at all this term. His last league appearance for QPR was in December 2015.