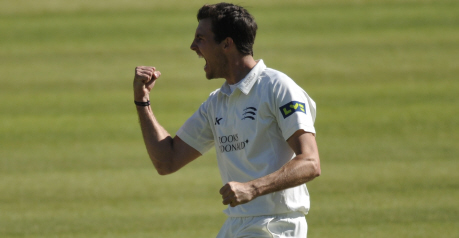 Adam Voges is tipping his Middlesex team-mate Steven Finn to be on the minds of the England selectors for this winter’s Ashes tour.

Finn bowled the county to the brink of safety in County Championship Division One this week, returning bowling figures of 8-79 to skittle Lancashire.

It may not be enough to put him back ahead of Middlesex colleague Toby Roland-Jones or pace bowling rivals Chris Woakes, Mark Wood and Jake Ball, as support to new-ball pair James Anderson and Stuart Broad.

But Australian Voges, who was one of Finn’s victims during his Test-best 6-79 in the third match of the 2015 Ashes, believes the paceman is finding his best form at just the right time.

“Steven bowled as well as I’ve ever seen him bowl in a game of cricket,” Voges said after the win over Lancashire.

“We were two bowlers down with Toby Roland-Jones and Ollie Rayner off the park with side strains, so for Finny to stand up and lead our attack the way he did was magnificent.

“He had rhythm, his pace was up and his areas were good.

“There was enough in the wicket that if you put it in those good areas you’d get something out of it and I think he did that consistently well.”

Finn has been through career highs and lows in Australia – he was part of the Ashes-winning team in 2010-11 but was sent home from the tour in 2013-14 after being deemed “not selectable” due to his action.

However, the 6ft 7ins bowler says he wants to be considered for the squad, which is due to be announced on Wednesday (27 September).

“I’m content with where my game’s at so it’s really up to the selectors now to see who goes Down Under,” he said.

“It’s an exciting prospect to be in the mix. I’ve got experience of playing in Australia, both in ODIs and Tests, and those experiences have been good and bad, so I’d like to think I would add to whatever group of players go down there.”