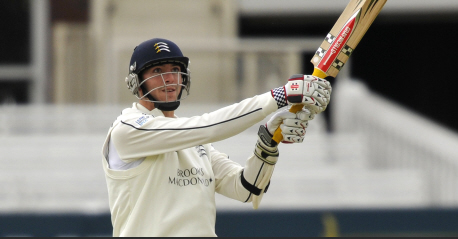 Toby Roland-Jones was Middlesex’s hero with both bat and ball but limped out of the action late on during an action-packed opening day at Lord’s.

The England paceman first dug his side out of trouble, hitting 53 and sharing an eighth-wicket stand of 102 with Ollie Rayner (52 not out), as Middlesex recovered from 89-7.

He then took 2-30, removing Haseeb Hameed and Shivnarine Chanderpaul, to help reduced Lancashire to 113-5 as 15 wickets fell inside 96 overs.

However, Roland-Jones failed to complete the third to last over of the day and went off for treatment.

The day started with two surprise decisions by Middlesex – after skipper James Franklin was dropped, his stand-in Adam Voges elected to bat after winning the toss.

The wickets continued to fall until Lancashire’s seamers lost their radar for an hour or so, enabling Rayner and Roland-Jones to counter-punch.

Lancashire then lost both openers to consecutive deliveries with only 22 on the board, and were 56-4 when skipper Steven Croft and Chanderpaul dug in to add 39, before Roland-Jones removed the veteran West Indian.