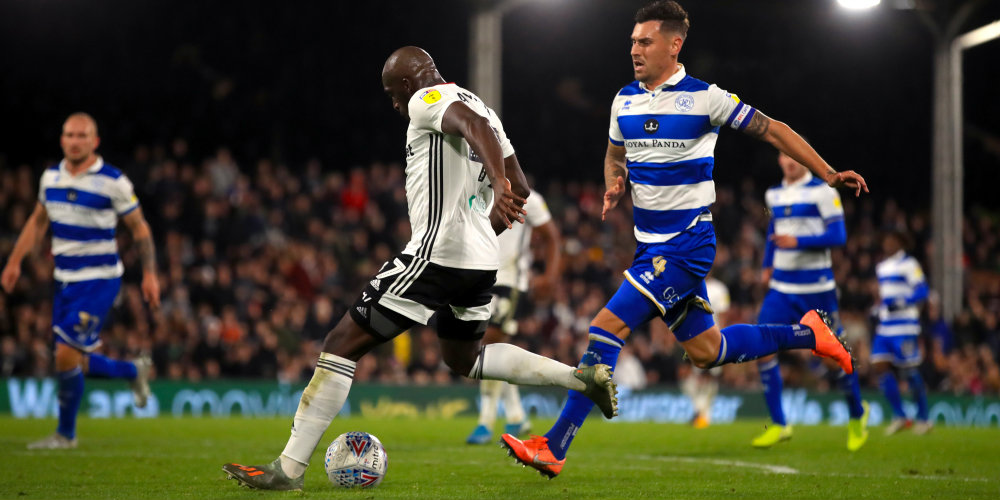 Aboubakar Kamara scored both Fulham’s goals as they beat QPR 2-1 in the west London derby. Here’s how we rated the players.

Was left exposed by an erratic defence early on when QPR were in the ascendancy. However, the keeper made a great stop with his feet to deny Nahki Wells on the break with the visitors seeking to regain their lead. Also smothered an Ebere Eze drive after the restart.

Had some early difficulties containing Eze on the right side of defence with QPR in confident mood. Regained his composure though and supplied a superb cross for Kamara to net the leveller.

Had trouble containing QPR striker Jordan Hugill on occasions. Did well to regularly clear danger as QPR pressed the hosts hard at the start of the second half.

Almost conceded a second goal following a 14th-minute R’s raid, turning Todd Kane’s cross against his own post. Made some timely second-half interventions.

The Whites left-back was caught out for the opening goal when he allowed Kane space to drill in a cross. More diligent as the game progressed.

Could have done a little better from a free-kick in a good position as the Whites sought to go in front. Was well policed at times by QPR’s Luke Amos but a fine assist led to Kamara’s second goal.

Industrious and helped out defensively at times with QPR trying to cause havoc on the right side. Substituted for Bobby Decordova-Reid as Fulham boss Scott Parker opted for more freshness.

A quiet opening for the Fulham playmaker until the equaliser. Did well to set up Ivan Cavaleiro in the 32nd minute, with his team-mate subsequently striking the post. More influential as the game went on.

Quiet for long spells but almost put Fulham ahead on 54 minutes, creating space inside the QPR box before his shot was well saved by Joe Lumley. Struck the post in Fulham’s busy attempts to score a third goal, before making way for Cyrus Christie.

In for the suspended Aleksandar Mitrovic – and he delivered. A precise header drew the hosts level. A calm finish in the 62nd minute was well deserved for a display full of threat.

Unlucky to hit the woodwork from close range as Fulham grew in stature after their equaliser. Always busy trying to create openings and hustled throughout.

Came on for Harrison Reed 0n 53 minutes. Helped drive the Whites on as the visitors waned.

Replaced Knockaert on 73 minutes with Parker looking to shore up Fulham’s narrow lead. Did what was asked of him.

Having dealt with the shots that came his way, including a close-range stop from Knockaert, the keeper’s poor distribution proved costly again as he presented the ball for Stefan Johansen to set up the winner.

At times Hall looked less than comfortable on the right of a three-man defence and, although he put in some important challenges, he failed to get tight to Kamara for the Fulham equaliser.

The German defender was strong in the air but at times vulnerable on the ground, allowing Cairney to wriggle and create an opportunity that Cavaleiro struck against the post.

Strong positional sense and a calm head contributed to a solid defensive display by Wallace, who put in a crucial challenge to halt Knockaert in his tracks as Fulham fought their way back into the game.

Galloping tirelessly down the right flank, Kane supplied the cross for Hugill to open the scoring and delivered several similar balls that caused headaches for the Fulham defence.

Ball started strongly in the anchor role, getting a timely foot in when required, but his influence waned later on and he was sacrificed in favour of the extra forward for the final 10 minutes.

While the midfielder was outmuscled at times, he was heavily involved in Rangers’ early domination, spraying passes around and it was something of a surprise to see him withdrawn on 66 minutes.

In his element as Rangers bossed the opening 20 minutes, the skilful Eze danced around opponents at will – although he was unable to take advantage of the scoring chances that fell his way.

Passing? Tick. Crossing? Tick. Defensive work? Suspect – as evidenced when he allowed Odoi to give him the slip and cross for Kamara to head his first goal of the evening.

The Rangers centre-forward worked hard and, although he seemed to scuff the finish that gave Rangers a third-minute lead, he also brought two impressive stops from Rodak later on.

He looked sharp early on, but Wells wasted an excellent opportunity to make it 2-0, firing straight at Rodak when clean through, and faded before being replaced midway through the second half.

Brought on to replace Amos for the final quarter of the game, Chair showed flickers of promise and cut inside to force an injury-time save from Rodak as Rangers strove in vain for an equaliser.

Having come on in place of Wells to shore up Rangers’ midfield, Scowen had few opportunities to impress, although he did react quickly to set up a half-chance for fellow substitute Chair.