The euphoria of a Champions League trophy will not fool head coach Thomas Tuchel. The German’s insatiable desire for improvement demands Chelsea take their evolution up a notch in their present campaign.

Romelu Lukaku is the next-level solution. But how will he fit in?

From Tuchel’s first game on January 27 up until the May 1, Chelsea ranked first in the league for shots on target (88), first for chances created (188) and second for total shots (222).

Lukaku’s arrival demonstrates an important first step towards making the Blues’ frontline as dominant as their defence, but are there other signs suggesting a change in the making?

There is the possibility of Tuchel resorting to a familiar and highly effective attacking approach from his Borussia Dortmund days.

Some of the most scintillating football Dortmund produced under Tuchel was down to a supremely adventurous 3-1-4-2/3-5-2.

The formation offered Tuchel flexibility and control, allowing him not just to utilise Dortmund’s explosive attacking talents to the fullest but to also customise his line-up according to his opponents’ strengths and weaknesses. The fundamentals of this formation are the 3-1 at the back, with a lone defensive midfielder helping progress play by linking up with the three centre-backs.

The central centre-back (Mats Hummels/Marc Bartra) often played dangerous long passes from the back, while the left or right-sided defender were encouraged to sometimes step into midfield to overwhelm opposition man markers. At wing-back, Tuchel often played balanced options in Marcel Schmelzer or Lukasz Piszczek, but when a goal was needed, Christian Pulisic and Andre Schurrle were used to add a direct threat. 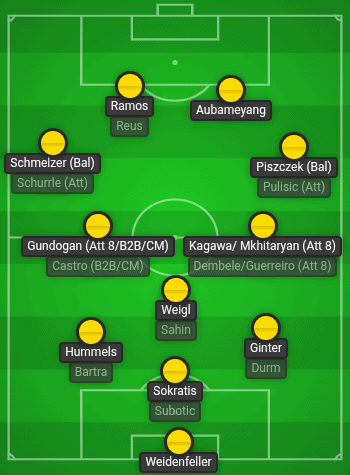 In midfield, the defensive midfielder’s duty would remain consistent (Julian Weigl/Nuri Sahin), but in central midfield, Tuchel played either:
a). One of Gonzalo Castro/Moritz Leitner/Kevin Kampl and an attacking number 8 (Shinji Kagawa/Henrikh Mkhitaryan/Ilkay Gundogan/Marco Reus or Ousmanne Dembele).
b). Two attacking 8s when he wanted extra firepower. One of those would drop deep to help build up play if the opposition pressured Weigl.

In the front two, Pierre-Emerick Aubameyang featured with the industrious Adrian Ramos or with Marco Reus (all three could play on the wing.) Both forwards would often start extremely wide when out of possession, forcing the opposition centre-backs wide.

This allowed space in the centre, which was often attacked by the attacking 8s. In possession, Dortmund would rely on the play-making capabilities of their creative 8s like Gundogan, Kagawa, Raphael Guerreiro and Dembele, while Aubameyang and Reus played off the shoulder of defenders or ghosted in behind them to score.

The ingredients are certainly there to emulate Dortmund’s blueprint. In central defence, Thiago Silva has demonstrated an excellent range of long passing, while Antonio Rudiger, Cesar Azpilicueta, Reece James and now Trevoh Chalobah are capable of stepping into midfield to offer wide overloads, crosses and progressive passes into the final third.

At wing-back, Tuchel has balanced options in James and Ben Chilwell, but can also employ Callum Hudson-Odoi, Marcos Alonso or Christian Pulisic at wing-back when attack is the priority.

In midfield, Tuchel possesses box-to-box options in Mateo Kovacic and N’Golo Kante, while Hakim Ziyech and Kai Havertz offer the ingenuity and creative spark. At Dortmund, Gundogan offered the box-to-box midfielder’s influence as well as the attacking 8’s cunning; there is no doubt that Mason Mount could match and even surpass the performances that made Gundogan one of the most sought-after midfielders in Europe back then.

Up front, Lukaku and Timo Werner have both thrived as part of a front two in recent years. Werner excelled when the physical presence of Yousef Poulsen or the cleverness of Marcel Sabitzer drew attention away from him at Leipzig, while at Inter, Lukaku offered the perfect foil for Lautaro Martinez, who exploited spaces with devastating efficiency.

The added benefit of Werner preferring to start wide left and Lukaku starting wide right also offers the option of stretching the opposition’s defensive line so that the spaces can be attacked by the likes of Havertz and Ziyech directly or by playing in Werner. 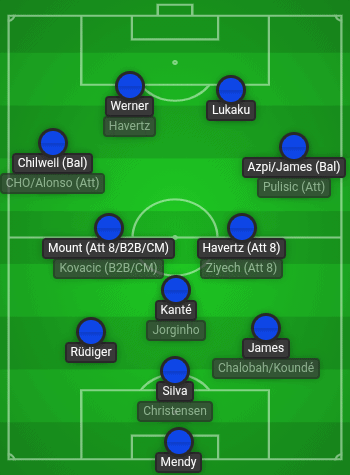 A looming formation shift could explain why there has been radio silence with regards to any midfield signings after Lukaku’s capture.

The board were seemingly ready to shell out around £60m for Kounde and paid nearly £100m for Lukaku, but there was no bid for Declan Rice.

Minor interest reported in Rennes prodigy Eduardo Camavinga, Monaco’s Aurelien Tchouameni and Barcelona’s Ilaix Moriba have all gone cold. This suggests two possibilities – either the club is silently working on deals for one of these options or that Tuchel has told the board that three midfielders are enough for the single holding role in a 3-1-4-2.

A third option would be for Tuchel to play the highly impressive Trevoh Chalobah as the lone defensive midfielder (a position he is adept at) which wouldn’t be unlikely at all considering it was Tuchel who promoted Weigl from the Dortmund academy straight into the first team.

The possibility of going two up top has been mentioned by Tuchel himself.

“We have now with Romelu the chance also to play with two strikers, like they did at Inter with him, or to continue with three strikers,” Tuchel said. “We will see now how this works out and we will find a solution for the players around him.”

Tuchel also tried out a 3-5-2 in the second half of the pre-season friendly against Bournemouth – a formation he had previously used in the 2-0 win against Fulham, where Havertz thrived in a front two with Werner. And Ziyech and Mount played as two attacking 8s in front of Billy Gilmour in the lone pivot.

Considering how Chelsea struggled to break down sides that played deep and on the break, this ultra-attacking 3-1-4-2 could be the ideal plan B to overwhelm the opposition with multiple problems.

However, Tuchel’s brilliance often lies in his tactical versatility and ability to improvise. At Dortmund he tried at least six formations in two seasons; in Paris he tried out even more. 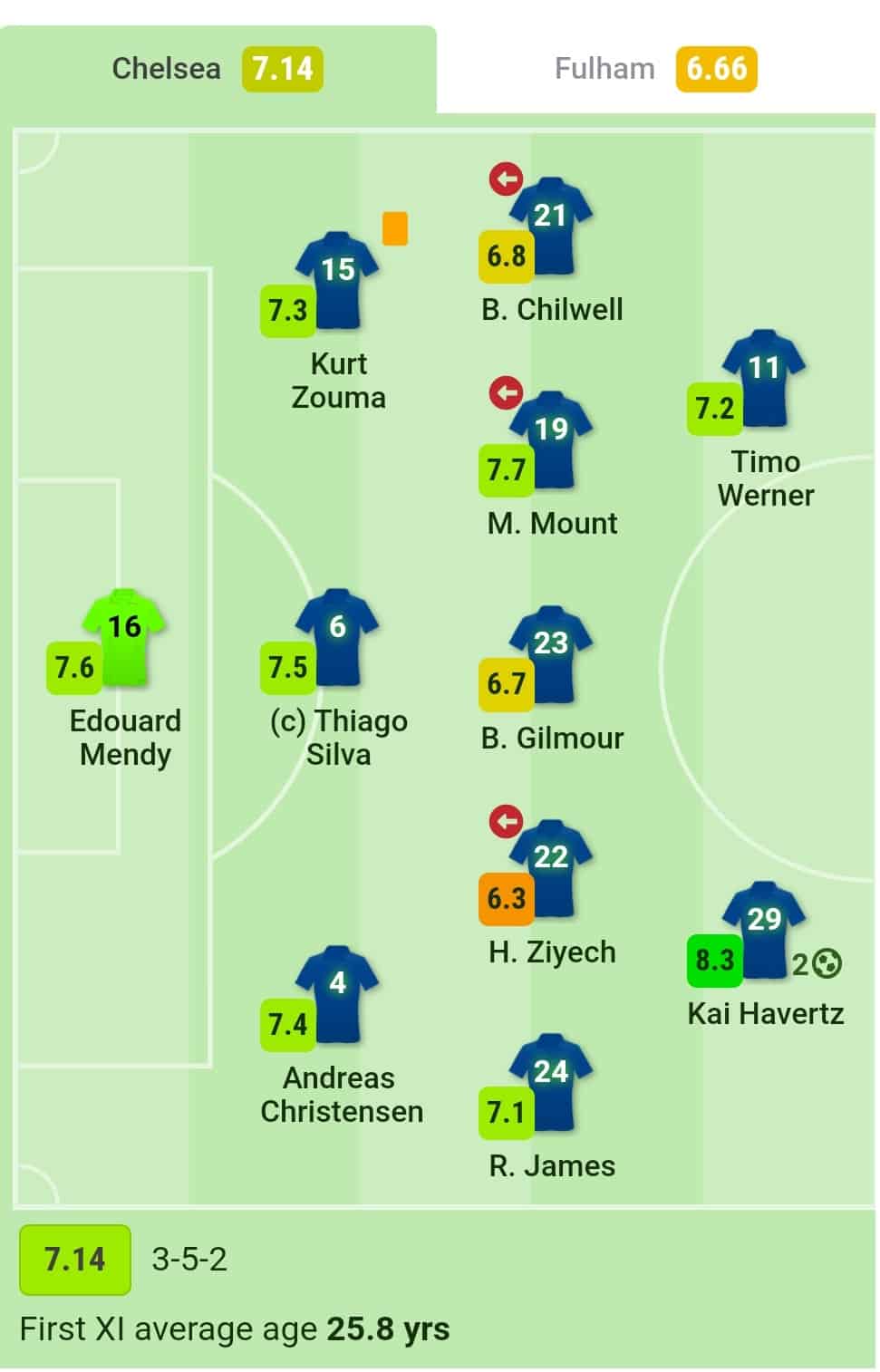