Sarri tells Fabregas to go and Hudson-Odoi to stay 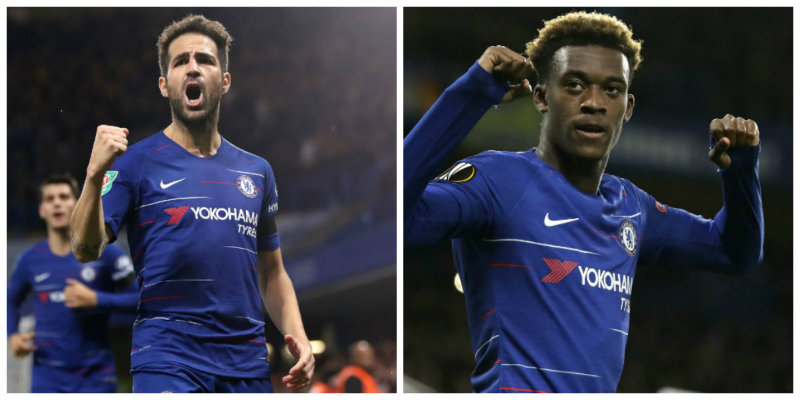 Cesc Fabregas should leave Chelsea for the good of his career but the opposite is true of Callum Hudson-Odoi, according to Maurizio Sarri.

Doubts remain over the future of teenager Hudson-Odoi, who has 18 months remaining on his contract and is wanted by Bayern Munich.

Head coach Sarri is in no doubt that the youngster’s interests would be served by staying at Stamford Bridge.

And the Italian also says he now regards him as a viable first-team option.

“I know only that for me he’s a very important player. He’s very young, but now he’s improving,” said Sarri.

“I think to stay here is better for him. He’s an English player. He’s very young. He has the future. And I think he has a very great future here, in England, with the national team and with Chelsea.

“We have very important players in the same position. I think now he is ready.

“Sometimes he will be on the bench, as Willian, as Pedro. Now I can start to consider him at the same level (as Willian and Pedro).”

The 31-year-old’s contract expires at the end of this season and he appeared to say goodbye to Chelsea after Saturday’s 2-0 FA Cup win over Nottingham Forest, when he applauded all sides of the ground.

With Chelsea only offering one-year contracts for players aged over 30, Sarri said Fabregas should accept the longer-term deal on the table from Monaco.

“In my opinion, he needs to go,” said Sarri, speaking ahead of Tuesday’s Carabao Cup semi-final first leg against Tottenham at Wembley.

“He has an offer for two years. I don’t want a very important player like Cesc unhappy.”

Sarri refused to comment on reports Cagliari’s Nicolo Barella has been lined up to replace Fabregas. But he said a replacement would be needed, particularly in light of Ruben Loftus-Cheek’s back injury.