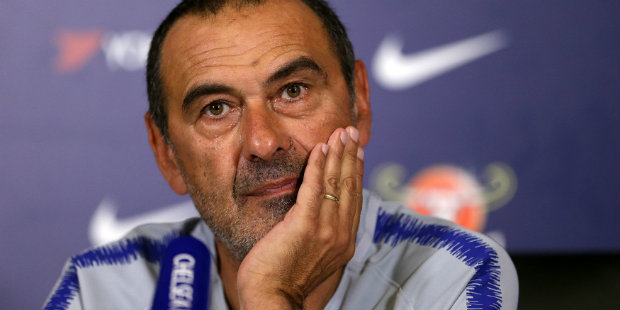 Maurizio Sarri blamed nerves for Chelsea’s underwhelming performance in a 2-0 win over Fulham.

Pedro struck after four minutes after N’Golo Kante had dispossessed Jean Michael Seri – a passage of play described as a “present” by Fulham boss Claudio Ranieri.

But Chelsea’s second came late on through substitute Ruben Loftus-Cheek, as Sarri lamented the failure to “kill” the contest.

“After the 1-0 the players on the pitch had a very good level of application, attention, but without trying to kill the match,” Sarri said.

“We needed to kill the match before (we did). But I think today we were a little bit tense.”

Chelsea responded from their first loss of the competitive season, a 3-1 defeat at Tottenham ending an 18-game unbeaten streak, by beating PAOK Salonika on Thursday and following up by beating their west London rivals.

Sarri stressed the result was more important than the performance, having criticised his players’ display at Wembley.

The Blues boss deflected the suggestion his comments may have contributed to any tension.

“I think in Tottenham 11 players played very badly and so I thought that today it was natural to give them another chance,” Sarri added.

“Of course, it wasn’t easy the days after Tottenham, for me, for the players.

“But I think we have talked too much about that match. We lost a match after three months and a half. It can happen.

“Today it was important to react. The team reacted really very well in the Europa League.

“Today was more important, of course, and I think in the mind of the players there was only the result.”

Kante had been singled out for criticism by Sarri, who said the France World Cup-winning midfielder performed “well” against Fulham, while also demanding further tactical improvement.

“I remember only one mistake in the first half,” Sarri added.

Loftus-Cheek is pressing Ross Barkley and Mateo Kovacic for a starting place.

Sarri said: “In the last three weeks he solved me problems.”

Alvaro Morata dropped to the bench as Olivier Giroud started up front, but the Spain striker missed a straightforward chance when coming on as a substitute.

“They need more continuity,” Sarri said of his strikers.