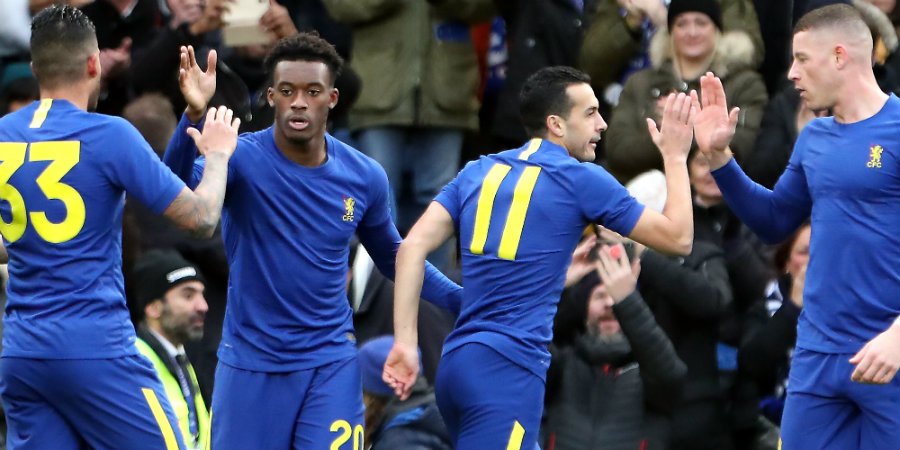 Chelsea eased to a second consecutive 2-0 victory over Nottingham Forest to reach the fourth round of the FA Cup. Here’s how we rated the Blues players at Stamford Bridge.

Untroubled for virtually the whole match, save for a tame João Carvalho effort from the edge of the box. Might have relished the chance of a customary penalty save to keep him busy in the first half, but for VAR to overrule the referee’s initial decision of a foul by Fikayo Tomori.

One of the standout performers on the day, constantly providing a dangerous outlet down the right flank along with star man Callum Hudson-Odoi. Should have had an assist or two, but for Michy Batshuayi spurning a couple of his superb crosses, and won his battles up against fellow youngster Brennan Johnson – including one time when he wriggled between two players when under pressure, much to the delight of the home crowd. Perhaps unlucky to be booked for a challenge on Yuri Ribeiro despite getting to the ball first.

Had the better of the speedy Alex Mighten throughout the game, though he perhaps got away with one when the teenager was marginally offside before being brought down in the box by Tomori, which meant that VAR overturned the penalty decision.

Handed his first start since the Premier League loss at Everton and distributed the ball nicely from the back, with the highest pass success rate of any starting outfielder.

Made his 50th appearance in a Chelsea shirt and flashed a bouncing shot wide in the dying embers of the game. Helped the team ease pressure on a few occasions, receiving several cross-field balls from James on the opposite side of the pitch to stretch play.

Kept things ticking over in the middle as stand-in captain and protected the Blues’ back line well.

Worked tirelessly in transition as Forest looked to play mainly on the counter-attack, having tracked back to thwart any danger on a few occasions. The Croatian chipped in with a couple of important tackles to break up play.

Linked up beautifully on the break and with Hudson-Odoi in the right channel, constantly threatening on the half-turn between the lines. Got his second goal of the season by anticipating a rebound well, and could have had another though only managed to find the post with his header. A fine performance.

The Spaniard’s cross-field runs from left to right caused all sorts of problems for Forest’s back line especially early on. Switched flanks with Hudson-Odoi in the second with the game’s tempo dying down and came off for teenager Tariq Lamptey with the game seemingly won.

Set the tone for the match by notching his first goal since September, having cut inside and beaten goalkeeper Jordan Smith at the near post. A confident outing for the England international, who was a constant threat on the break with his dynamism and a game-high five dribbles. Added another assist against Forest after providing two for Alvaro Morata in the corresponding fixture this time last year, and could have had another goal with the final kick of the game. Excellent throughout.

Started off fairly well by dropping deeper to connect midfield to attack, and almost put away a couple of Reece James crosses in the first half. Should have put the game to bed midway through the second half, but harmlessly volleyed over from Hudson-Odoi’s pin-point cross. Will be interesting to see if it was his final involvement in a Chelsea shirt, with clubs rumoured to be circling for his signature.

Came on for Kovacic and with 20 minutes to play and was involved in a few attacks, though nothing came of them as the home side saw the game out at a canter.

Fielded higher up on the right wing ahead of James late on as manager Frank Lampard introduced him to the Stamford Bridge crowd for the first time – more invaluable experience for the 19-year-old academy graduate.