Chelsea held on to win the west London derby despite a spirited performance from much-improved Fulham. Here’s how we rated the players in the game at Craven Cottage.

Got down well to keep out a low shot from Eden Hazard, and did even better with a strong left-arm reflex stop to prevent Gonzalo Higuain from scoring his second just before the interval. No chance with either goal.

Almost gifted Hazard a goal after running out of defence and into a thicket of blue shirts – Rico saved his bacon. Blocked a Willian shot late on and launched an attack which almost brought a late equaliser.

Disappointed to have allowed Higuain to ghost in in front of him for the Chelsea opener and had his hands full coping with the livewire Argentinian.

A great block denied Hazard a clear target, earning the American the familiar “Ream!” calls from delighted home fans. Gave his all.

One of his best displays for the Whites so far. Made a really bright start, attacking the byline and firing off a right-footed shot from just outside the area that had Kepa scrambling. Also had another on-target shot in the second half.

Got in the way of a Willian shot and was soon breaking up attacks with interceptions and getting his shirt ripped for the cause. Booked for trip on Willian, but typified the fight caretaker boss Scott Parker wanted.

Left alone at the far post to crash in the 27th-minute equaliser from a short corner routine – only his second goal for the club. Some decent driving runs into enemy territory.

Supplied a cross from which Aleksandar Mitrovic almost made it 1-1, moments before Fulham drew level, and linked up well with Bryan to cause a few problems for the Blues down their right flank. Unlucky to be flagged marginally offside when he netted from close range in injury time.

Always involved and always looking to link up play. Had a second-half effort palmed away by the diving Kepa. Given an appreciative ovation when he went off on 80 minutes, Luciano Vietto his replacement.

Missed a good chance to open the scoring when Kepa spilled a McDonald cross just before Chelsea took the lead. Did not get into the game as much as Parker would have liked. Made way for Floyd Ayite for final 20 minutes, who laid on a late heading chance for Mitrovic.

Connected perfectly with a Sessegnon cross to arrow a left-footed volley towards the top corner – Kepa making a great save. Also bulldozed around Andreas Christensen to send a dipping effort just over and had a late header saved.

On for McDonald on 62 minutes, but did not have a major bearing on proceedings, with Chelsea’s midfield often bypassing him.

Reinstated after a one game ‘ban’ by Maurizio Sarri for his Wembley insubordination and his first touch was the nervous spill of a high cross, but made great one-handed save to keep out a Mitrovic volley and looked sharp.

Excellent John Terry-like block to get in the way of a Cairney drive and a typical assist for Higuain’s goal after getting on the overlap to make the telling cross.

As when the teams met at Stamford Bridge, the German gave no quarter in his battle with dangerman Mitrovic. Composed and imposing.

Showed good pace and anticipation when called into action and rarely looked troubled. The sort of calm display which he summoned regularly last season.

Chambers scored in a section of the penalty area he should have been tying down at a corner. Had a relatively quiet match – not getting forward too often. Was caused problems by Sessegnon in the second half.

A rare goal from the oft-maligned midfielder. Was left alone to stroke a shot into the top corner to restore Chelsea’s lead on 32 minutes. Rightly booked for planting his studs in Sessegnon’s ankle.

Caught the eye more with his eagerness to track back than as an attacking force. Replaced for the final 12 minutes by Ruben Loftus-Cheek, who brought more attacking verve.

Scampered around all over the place, usually to great effect, breaking up Fulham attacks and launching Chelsea ones. Superb energy and ability to run into pockets of space.

Crashed a shot into the side netting in the second half, but his determination to go for goal undermined some good work down the flanks.

An assist for Jorginho’s goal with a dart into the box and simple roll back into space. Floated into pockets of space, making it so tough for Fulham to keep tabs on him. Fizzed a low cross into the area that needed the slightest touch to yield another goal. Pedro replaced him on 74 minutes.

Early glancing header off target, but made no mistake on 20 minutes, burying a cross from Azpilucueta. Should have had another when picked out by an excellent Jorginho chip, but fired over. Had another rasping near-post drive kept out by Rico.

Eeplaced the booked Jorginho on 68 minutes and barely had a kick. 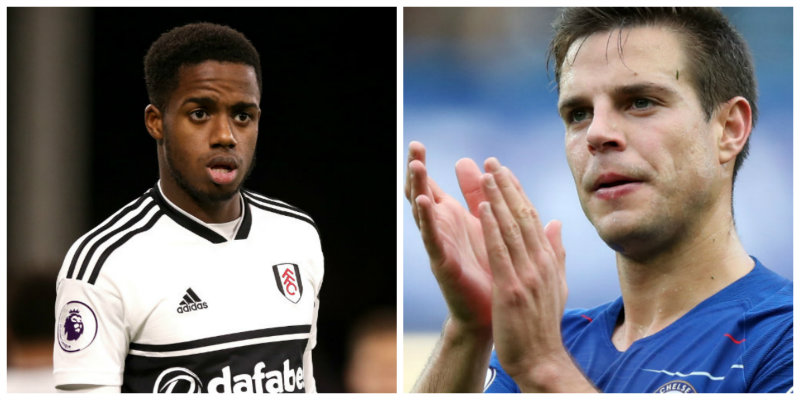