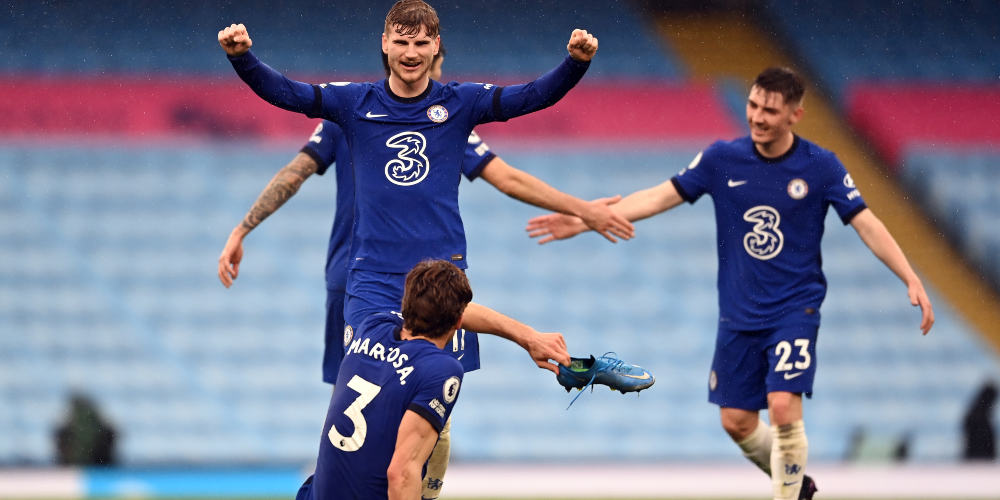 Marcos Alonso scored the winner in the final seconds as Chelsea came from behind to beat Manchester City. Here’s how we rated each Blues player.

Made a couple of routine first-half saves and did well keep out Sergio Aguero’s attempt at a Panenka penalty given that he had to quickly readjust his position.

Typically defensively solid and got forward to good effect too, not least when teeing up Hakim Ziyech for the equaliser.

Looked unconvincing before losing out to Gabriel Jesus in the build-up to the City opener. Was injured in the process and had to go off.

Had an excellent game. He was solid, composed and won numerous challenges.

Did really well on the right flank, where he caused City major problems throughout with his pace and eagerness to get crosses in.

Unlucky when a penalty was awarded after he collided with Gabriel Jesus. He was neat and tidy in midfield and helped Chelsea get control after a tough first half.

The Frenchman played an even bigger part in Chelsea wrestling back control in midfield. He was dominant, energetic and will be a vital player against City in the Champions League final.

Given a starting place and justified the decision with the winning goal and an all-round tidy display on the left.

Caused City problems with his skill and movement – and levelled with a thumping left-footed strike.

Less effective than Ziyech for the most part, but did improve in the second half.

Once again he worked hard and contributed plenty but was poor in front of goal. His failure to stay onside led to a disallowed goal and he rarely looked like scoring. But he made amends by laying on the winner for Alonso.

On for the injured Christensen, Zouma was arguably fortunate not to concede a penalty with a challenge on Raheem Sterling, but before that he thwarted the England man with a superb tackle in the area.

Played a big part in the win as he was calm and composed in midfield after coming on midway through the second half.

On for 16 minutes and certainly made an impact. He was involved in the build-up to the winner having earlier had a goal disallowed for being marginally offside.