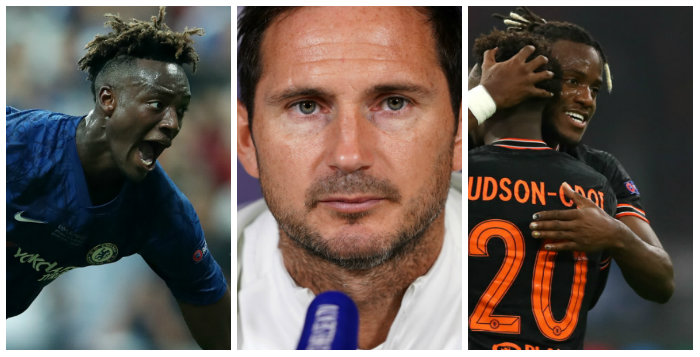 Tammy Abraham has been ruled out of Chelsea’s London derby against West Ham on Saturday.

The England striker was taken away on a stretcher after suffering a hip injury during this week’s Champions League game against Valencia.

He has not trained since and Chelsea are still assessing his condition. The club expect to know more early next week.

Michy Batshuayi is expected to replace Abraham in the side this weekend.

Speaking at a news conference on Friday afternoon, Frank Lampard refused to confirm whether Batshuayi would play against the Hammers rather than Olivier Giroud.

But the Blues boss praised Batshuayi, who has scored five goals for Chelsea this season.

“We’ll know by the end of the weekend,” Lampard said when asked how long Abraham is likely to be out for.

“He has some pain and won’t be involved tomorrow. We’ll see by Monday.

“It’s a squad game over the course of a season. When opportunities come they’re ready and I’ve got confidence in them.

“Michy has a quality and a work ethic. It’s not easy when you’re not playing as many minutes as you want.

“With Tammy’s form it’s meant that he (Abraham) has played a lot of minutes. But that can obviously change and now Tammy has his injury.

“I’ve seen a great work ethic and a persistence in how he (Batshuayi) works and his quality which we’ve seen when he’s come off the bench.

“That’s been great to see because we need competition in that place.”

Meanwhile, Antonio Rudiger is building up his fitness, having recently returned to training after surgery on a pelvic problem.

The German defender, previously troubled by a knee injury, has made just one first-team appearance this season but is edging closer to a return.

“But the reality is that he’s not played for a very long time, so it’s a mini pre-season now the injury seems to be hopefully finished.

“Now we need to get him properly fit and he’s working very, very hard.

“It’s days and weeks rather than  months, which is great news for us.”