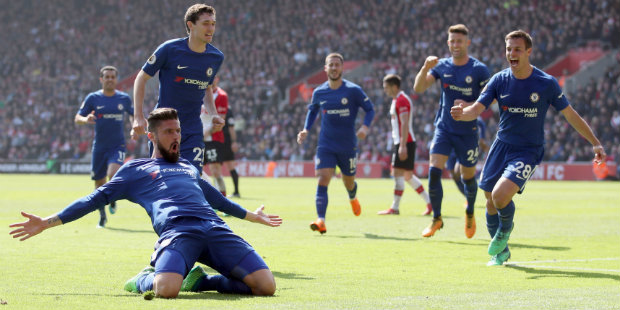 Former Chelsea star Pat Nevin says Olivier Giroud is “the best in the business” at scoring at the near post.

Giroud has scored five goals in 17 games since joining for £18m from Arsenal in January, but only nine of those appearances have been starts.

Blues legend Nevin, now a respected pundit, told West London Sport: “Not only does Giroud give you goals, but he has a real presence and it lifts everyone around him.

“Giroud is robust and strong, has the work-rate, his use of the ball is excellent and he ties up at least two defenders because of that presence.”

Giroud scored twice after coming on as a substitute in the 3-2 comeback win over Southampton last month, netted the opening goal in the FA Cup semi-final success against the same side just over a week later, as well as grabbing the only goal in the victory over Liverpool.

“His footwork for the goal in the FA Cup at Wembley was outrageously good,” Nevin added.

“The near-post header against Southampton was as classic a Giroud goal as you will see; he is the best in the business at scoring from in front of the near post.

“He has the ability to flick or redirect the ball from in front of the near post, at an angle, with pace and accuracy.”

Nevin expects Giroud’s ability to bring others into play and provide a platform for players like Eden Hazard, Willian and Pedro to earn his a place in boss Antonio Conte’s starting line-up for Saturday’s FA Cup final against Manchester United.

“Nobody can guess what Conte will do,” said Nevin.

“Technically Morata is so good but he has had an up-and-down season and found it difficult to adjust to the Premier League. He is still a fabulous player but I have a feeling he will go with Giroud.”