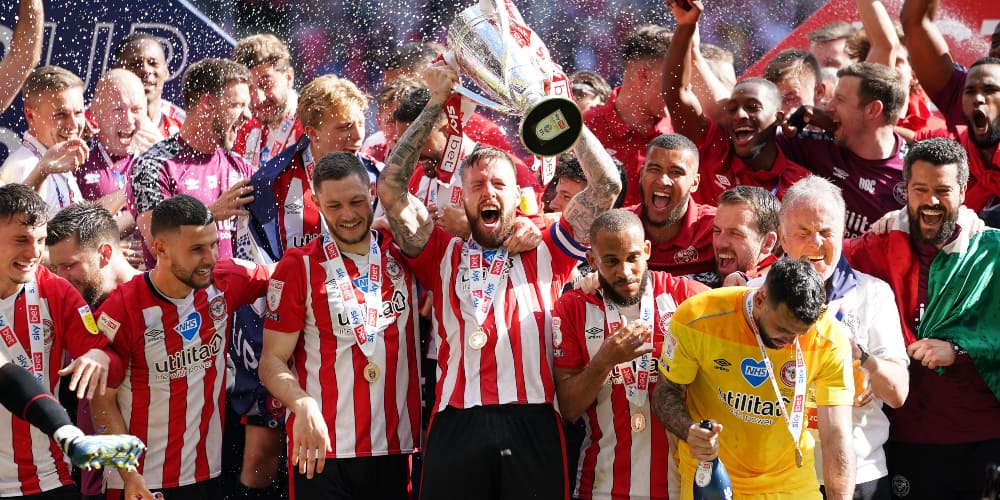 Tears being shed by Brentford fans at play-off matches has been a common occurrence over the past 30 years.

But for once the outpouring of emotions when the full-time whistle blew at Wembley on Saturday was one of joy.

The Bees, who famously held the dubious honour of having the Football League’s worst record in play-offs of failing to win promotion in nine attempts, made it 10th time lucky as they beat Swansea 2-0 to win the biggest prize of all – a place in the Premier League.

And as referee Chris Kavanagh blew for full-time, some of the roughly 5,000 Bees supporters in the restricted crowd cried and hugged the close family and friends with them.

It is a huge achievement for Brentford, who were in League Two as recently as 2009 and who have finished in the top half of the Championship in all their seven seasons at that level, which have included three play-off appearances.

In each of those campaigns, they have been competing against relegated Premier League clubs with their parachute payments, other ex-top flight sides with bigger stadiums and bigger budgets than them, and have coped every season with that and also the sale of one or more star players.

This promotion has been 10 years in the making and started in the summer of 2011 with the appointment of Uwe Rosler as manager, and then Matthew Benham taking over ownership of the club 12 months later.

After a ninth-placed finish in League One in Rosler’s debut season, the club came within a Marcello Trotta penalty-kick of promotion to the Championship the following year, and then lost the play-off final to Yeovil.

The following season, during which Mark Warburton replaced Rosler at the helm halfway through, saw promotion achieved to start the Bees’ stay in the second tier.

The club has steadily made money on players with their buy cheap, sell high strategy and as the profits increased, so has the quality of players arriving at the club.

Last summer, their planned farewell to their home of 116 years – Griffin Park – was ruined by the lockdown, but they will kick off in the Premier League in August in the brand new Brentford Community Stadium.

Even that was built with the Premier League in mind, with its originally-planned 20,000 capacity being cut to 17,250 to allow for outside broadcast space required for top flight matches straight away, rather than having to adapt the stadium following promotion.

Wednesday 16 June is now a date inked into the diaries of every single fan as that is the day when the new season’s Premier League fixtures come out for an English top-flight season featuring Brentford for the first time since 1946/47.