Bonham backed by Curle after mixed display by Bees loanee 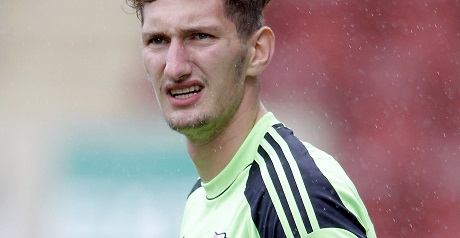 Bonham – who has made seven first-team appearances for the Bees but is now third choice after the summer arrival of Luke Daniels – joined the Cumbrians in the summer until January.

He made a shaky start to his loan spell, conceding a penalty in the 2-1 win over Cambridge in August after fumbling a cross.

An that may have been in his mind in deciding to punch against the Stags, only for the ball to drop to former Hayes & Yeading midfielder Calum Butcher, who lobbed the ball back over him.

Bonham did however save a penalty earlier in the match, and got the vote of confidence from boss Curle.

“Jack did well with the penalty,” Curle told Carlisle’s website.

“He’s made some other good saves in the first half but apart from the punch for the equaliser I don’t think he’s had too much to do in the second half.

“We’re probably comparing the punch for their goal with the one we conceded against Cambridge where he’s tried to go through bodies and catch it.

“We spoke to him about making sure he gets a good punch if the situation dictates it, but because of the pace of the ball he wasn’t able to get the distance it needed.

“He’s saved the penalty really well and he’s made some other really good saves, so he can pleased with his day.”