Today’s encounter between QPR and Chelsea – and Anton Ferdinand and John Terry – inevitably dominates the news. 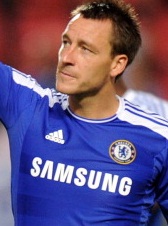 Terry is set to return to W12.

Amid tales of a bullet supposedly being sent to Ferdinand in the post, there is also speculation about whether the R’s defender will shake Terry’s hand before the game.

The Daily Mirror report the possiblity that all of the QPR team may in fact snub the England captain.

Based on a story in the Italian media that QPR are chasing Lazio’s Djibril Cisse, the Daily Mail, The Guardian and Daily Telegraph all suggest the former Liverpool striker could be on his way to Loftus Road.

The Mirror believe R’s boss Mark Hughes could offload Adel Taarabt to the Italian club as part of an exchange deal, which is also suggested by The Sun.