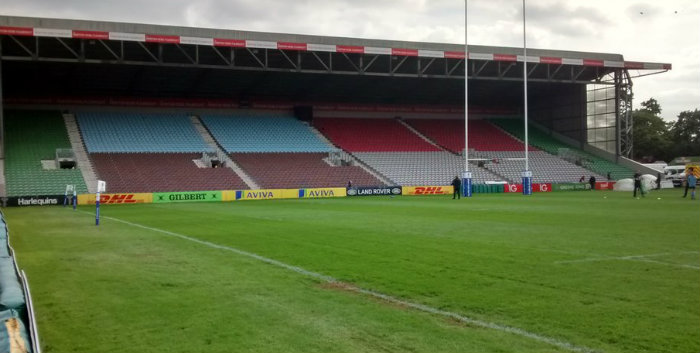 The Land Rover Premiership Rugby Cup, held at Surrey Sports Park on Saturday, gave hundreds of junior rugby players the chance to show off their abilities and passion for the game.

Based on the success of past tournaments organized by the Bristol Bears, London Irish, Worcester Warriors, and Exeter Chiefs, the Harlequins were given the opportunity to conduct the exciting Under-11 and Under-12 grassroots contest, where the Southeast’s most promising youngsters donned their footwear to vie.

More than 100,000 youngsters have participated in this prospering streak of statewide events, which has been organized by the Official Vehicle of Premiership Rugby – Land Rover – for nearly two decades, with some realizing their ambitions of playing Premiership Rugby.

The opportunity to attend the Gallagher Premiership Rugby Final at Twickenham was also on the line, as Haywards Heath won the Under-12’s championship after a fiercely contested tournament. Liam Cunningham, the team’s star player, said that celebrating this victory meant a lot to him because it increased his team’s morale. Haywards deserved the trophy because they played well together in the rucks, both when passing and when tackling.

The winning team in the Under-11 age group was chosen based on nominations for their commitment to rugby’s core values, with Chiswick taking home the title. Jake Mudge, the team’s star player, said they’ve competed in a number of competitions, but this is the first time they’ve won, emphasizing that the competition was fierce and that everyone wanted to win, which pushed them.

Harlequins stars Kenningham and Edwards Were in Attendance

Harlequins stars Jack Kenningham and Will Edwards were also in attendance, cheering on the teams and sharing their knowledge with the next generation of rugby players.

Kenningham said it was great to see lads out enjoying their rugby, emphasizing that he, too, used to play minis and that it was important to remember the fun you had as a kid because unstructured rugby allows kids to learn their trade while also having fun, simply as it’s all about having fun at this age.

Edwards went on to say that the greatest way to learn any sport is to play it and that this was a great opportunity to learn about themselves, their teammates, and have some fun. He also mentioned that he participated in one of these tournaments at the Stoop and that those memories stayed with him, so he was hoping that this would do the same and give all of the kids a boost to play professional rugby.

Back to the Premiership Battlefield

Against Worcester and Newcastle Falcons, Harlequins have collected maximum points. That preceded a comeback victory over Wasps in the Premiership, in which they fought back from a 16-0 deficit to win by a bonus-point margin.

Harlequins’ return to form couldn’t have come at a better time (both for their fans and bettors who favor them when wagering at sportsbooks of online casinos such are top Merkur online casinos), as they head to Bristol on Sunday, hoping to avoid any more West Country nightmares, with the big match against play-off adversaries London Irish the week after that, before their internationals return to face league leaders Leicester and then Montpellier in the Champions Cup.