QPR rounded off their pre-season trip with a friendly against Austria Vienna, who beat them 3-1.

It’s early days under Mark Warburton – everyone knows you can’t read too much into friendlies and that he is currently short of options up front. But there were a few things we learned from the early glimpse of Rangers under the new boss.

Warburton is determined to introduce an identity about QPR’s style of play – and that was obvious from the get-go in Friday evening’s game. Rangers will play a passing style under Warburton, playing the ball out from the back, of that there’s no doubt.

An unfortunate own goal aside, Yoann Barbet showed exactly why Warburton snapped him up on a free transfer. The former Brentford man looked comfortable on the ball and some of his passing was excellent. Warburton’s predecessor Steve McClaren also wanted to play from the back and the immediate results were disastrous, particularly the 7-1 mauling at West Brom. But whereas McClaren lacked a reliable, ball-playing centre-back, Warburton has addressed that straightaway.

McClaren also wanted a keeper comfortable with the ball at his feet – something Matt Ingram, recently sold to Hull, struggled badly with. Ingram was axed and there turned out to be no way back for him, whereas summer signing Liam Kelly is clearly a keeper with good feet as well as being a good shot-stopper. Joe Lumley faces serious competition for his place.

Amos’ base fitness is good

Taking Luke Amos on a season-long loan from Tottenham is arguably a significant risk given that he spent almost all of last season out with a knee injury. But he is clearly a fit player with a high level of base fitness, because he looked notably sharp despite the long lay-off.

Described by ex-boss Ian Holloway as a “rat” in midfield, Scowen lost his place as QPR’s defensive midfielder before enjoying a purple patch in a more advanced role towards the end of last season. He looks likely to stay in that role under Warburton, who plans to deploy loan signing Matt Smith in the deeper position. Scowen played further forward in Vienna and scored Rangers’ goal. 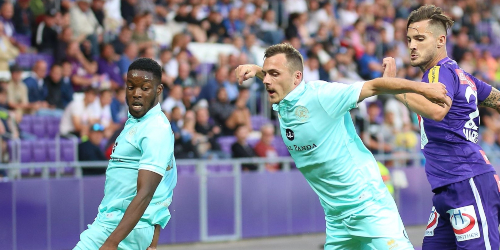