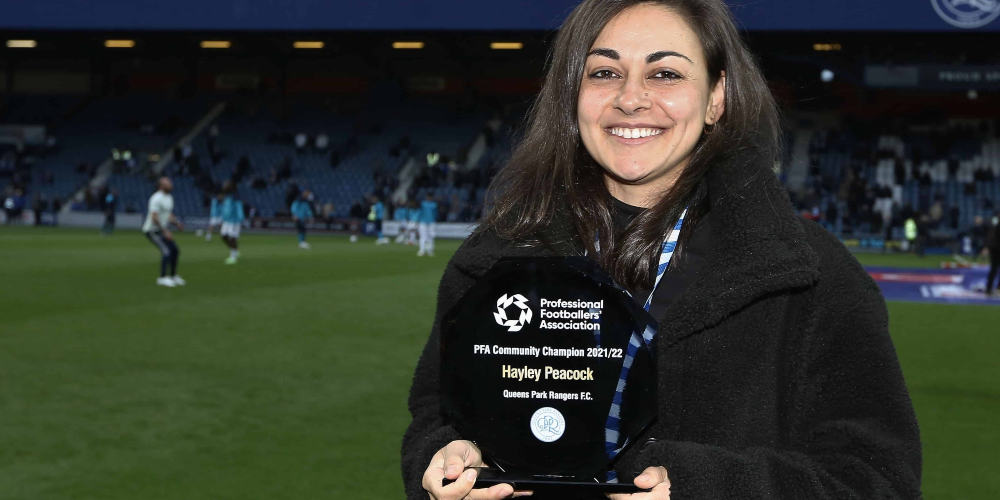 QPR Women’s captain says it was “amazing” to receive recognition for her community work away from the pitch while she has been recovering from a long-term knee injury.

Hayley Peacock was presented with the PFA Community Champion of the Year award alongside R’s striker Charlie Austin ahead of the men’s team’s game against Sheffield United on Friday evening.

The defender ruptured her anterior cruciate ligament in a game against Dulwich Hamlet last April and has remained sidelined this season.

It means she has been able to allocate more time to her community work – which has included acting as the club’s community player ambassador, taking part in fan zones before games, mentoring young people in and around west London, working with the HerGameToo campaign and more.

“I think having the injury and not being able to play has given me a new focus,” she explained.

“I can spend a lot of the time where I would be training or playing doing some community stuff and helping out with some of the activities the club’s running which is really good.

“It’s been good for me on a personal level but it’s been amazing to have that time to give back as well. It’s always been my pleasure to help out with stuff like this.

“It’s been pretty difficult post-Covid because a lot of the things that we did as a club before Covid, like going into schools, hospitals – we did loads of stuff with the men’s team.

“Obviously that’s had to change a little bit. It’s only really been this year that we can get re-engaged with the community again.

“I’m really honoured. It was amazing to get the award and it’s amazing to be presented with it on the pitch with one of the other men’s team in Charlie Austin who has been given it as well.”

QPR Women played at the Kiyan Prince Foundation Stadium for the first time on Sunday – beating Norwich City 2-1 thanks to a late strike from Sue Kumaning.

It rounded off a successful first season in the fourth tier of women’s football for the team, who finished fourth in the National League South East.

Peacock has her sights set on a return to action next season and says the opportunity to play at the Kiyan Prince Foundation Stadium is a big step for the Women’s team.

“I’m buzzing for them because I think it’s been a really long time in the making and it means so much to the girls to be playing on this pitch,” she added.

“We managed to get a training session here last year before we had our cup final and I remember it was just after I did my injury so I came round and watched them. Everyone was just in the best mood and I think having that environment helped us win the cup final in the end.

“It just gave us so much motivation and excitement and experience. It’s a fantastic end to the season for the girls.”