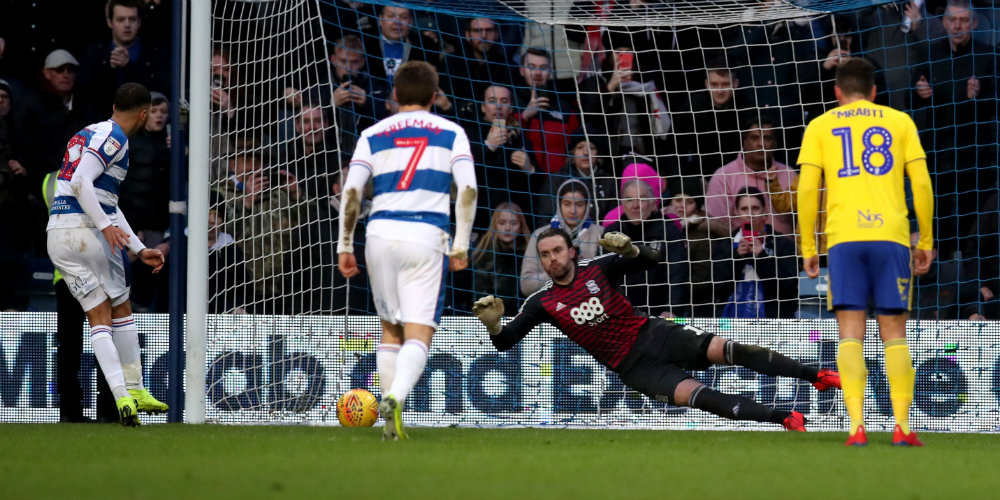 Che Adams scored a first-half hat-trick at Loftus Road, where the home side stormed back from four down and would have snatched a point had former R’s keeper Camp not kept out Nahki Wells’ spot-kick.

Adams has now scored in six consecutive Championship matches and his treble plus Harlee Dean’s header blitzed Rangers before Matt Smith scored just before and after half-time.

Jordan Cousins’ goal – his first goal for QPR – with 10 minutes remaining turned up the pressure on Birmingham.

And after Craig Gardner was adjudged to have fouled Luke Freeman, Wells had the chance to complete the comeback but was unable to beat Camp.

QPR manager Steve McClaren: “I’m proud of the players and proud of the fans for staying with the team. We could have scored eight goals in that second half. It was a great performance in the second half and we were a penalty away from 4-4 from an impossible position.”

Adams netted twice in the space of five minutes to put his team in control and then pounced again after ex-Brentford defender Harlee Dean had made it 3-0 on his return to west London.

Adams opened the scoring on 21 minutes. He turned away from QPR defender Joel Lynch and fired past keeper Joe Lumley, who was back-peddling having initially come off his line to meet Gary Gardner’s long ball forward only to change his mind.

And the former Brentford contingent combined for the Blues’ third goal, with Dean heading in Jota’s 36th-minute corner.

Jota was also involved in the build up to the fourth goal, scored six minutes later.

After Jota exchanged passes with Jacques Maghoman near the edge of the penalty area and curled a left-footed shot against the post, the ball struck a confused Lumley, and Adams followed up to finish from close range.

Smith also buried Wells’ low cross three minutes after the restart before fine saves by Camp kept the hosts at bay until Cousins made it 4-3.

Camp denied Smith a hat-trick by tipping over the target man’s deflected strike and denied Freeman after Smith had headed down Jake Bidwell’s left-wing cross.

Camp was at fault for Rangers’ third goal, flapping at Freeman’s cross before Cousins thumped home, but he redeemed himself in dramatic fashion.

QPR deserve credit for a spirited fightback and have an FA Cup fifth-round tie at home to Watford to look forward to on Friday, but this was their fourth defeat of a six-game winless run in the league.