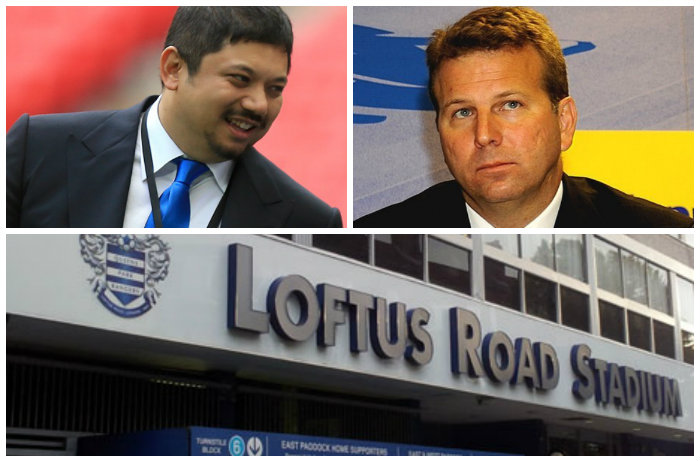 QPR do not expect to reach a settlement with the Football League over Financial Fair Play before the end of the year.

There has been speculation over the size of the fine likely to be imposed on the club for breaching FFP regulations during the 2013-14 season.

There have been reports that Rangers face a fine of more than £50m and, more recently, that a much smaller figure has been agreed with the League.

However, QPR chief executive Lee Hoos has insisted that legal arguments are still ongoing and that the matter could yet be decided by a tribunal.

Hoos (pictured top-right above) said: “The ongoing FFP process continues with the Football League. If it can be resolved, great, we’ll resolve it outside of a tribunal. If not then we continue on towards a tribunal.

“We’re still in the pleading stages. We [the club and the Football League] have each stated what our [legal] arguments would be and we’re still in the process of collating witness statements, testimonies and things like that.

“I’m not in a position to say more because it’s an ongoing legal proceeding. But I can’t see it [being resolved] this side of Christmas.”

Meanwhile, Hoos is hopeful that the club will eventually build a new training ground at Warren Farm.

It is nearly four years since Rangers identified the Southall site as their preferred choice for a training base and this year they submitted revised proposals after deciding to scale down their ambitious initial plans.

The more modest proposals were recently granted planning permission by Ealing Council but face continued opposition from some local residents.

“With Warren Farm, we’re not quite there yet. It’s getting there,” said Hoos, who left Burnley to join QPR during the summer and has also held key positions at Fulham, Leicester and Southampton.

“I’d like to say it’s all done and dusted. A lot of people think that because we’ve got planning permission we can go ahead, but it’s not quite that simple.

“For me, a new or certainly improved training ground is very, very important. It’s something we need to have.

“Since I’ve come here I’ve made no secret of the fact that for me our strategic priority is getting a training ground sorted out and getting something top-notch.

“That will enhance player value and help us develop players. That’s the workplace every day and something we’ve got to get right.

“We’ve got to have an improved training facility, no ifs or buts about it.”