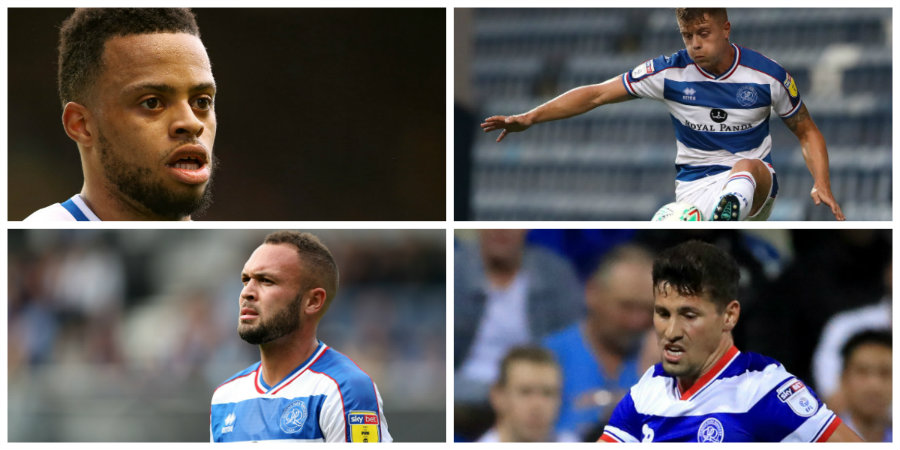 Four more of his signings – none of whom were inexpensive – leaving on free transfers this month underlined what a disaster Jimmy Floyd Hasselbaink was as QPR manager.

Hand-wringing over what took place under Hasselbaink’s predecessors has for some time masked how much money Rangers continued to waste after those much-maligned managers left – all while the club were suggesting a radical change of direction had occurred.

Significant losses have been made on Jordan Cousins, Joel Lynch, Jake Bidwell and Pawel Wszolek, all of whom cost substantial transfer fees and were on sizeable wages by Championship standards, if not by previous QPR standards.

Bidwell was at least a solid, consistent performer who made 122 Championship appearances during three years at the club and would have played more but for a couple of nasty shoulder injuries.

Wszolek, meanwhile, is a hugely likeable player with a work ethic and personality so infectious that even Ian Holloway, who often doesn’t connect with foreign players, took to him.

But in both cases there were – and are – plenty similar, cheaper options.

Add those four departures to those of Ariel Borysiuk, Idrissa Sylla, Yeni Ngbakoto and Conor Washington, who had already been shipped out, and the scale of bad judgement and financial waste is even more apparent.

This was not supposed to happen in the Les Ferdinand era. There was supposed to be a return to developing players with sell-on value.

The Wszolek deal was avoidable and a typical case of populism coming before commonsense at QPR.

The winger hardly set the world alight initially. But a decent run of form around the time of the following January transfer window, and the truly laughable suggestion that Chelsea were interested, prompted the all-too familiar Twitter-led baying for a signing which was greeted with much joy but shouldn’t have been made – and didn’t need to be, given that he was on a season-long loan.

Cousins also leaving on a free is galling. Ferdinand was the driving force behind that signing and Cousins – a young, highly-rated player who had stood out in the Championship for Charlton – seemed to fit the bill in terms of the kind of players Rangers were supposed to be targeting. But he simply didn’t deliver.

In defence of Ferdinand

Ferdinand will of course attract criticism in light of all this.

He was partly, but by no means completely, responsible for the hiring of Hasselbaink. Other options were put to Tony Fernandes, who, true to form, plumped for the biggest name on offer.

In any case, the appointment was made in the first place because the owners quickly lost their nerve soon into what was always going to be a difficult, sometimes acrimonious, rebuilding period under Chris Ramsey. The brief was inexplicably changed from consolidation to something more.

When it comes to judging some of the failures during Ferdinand’s time in his role, there are some strong mitigating circumstances.

First, he has always maintained that some signings don’t work out. That’s part of football.

Some have worked out – at least in financial terms.

Tjaronn Chery was signed courtesy of the Raheem Sterling sell-on after being flagged up by QPR’s data analysis team. He had his moments and left for China after he and the club received an offer too good to turn down.

Grant Hall was picked up on a free and was player of the year, with his progress later stalling because of injury problems.

Massimo Luongo should be regarded as a hit, while Alex Smithies was sold for a profit to a Premier League club and any discontent about the £4m fee ignores the fact that there were simply no other takers.

These kind of signings, as well as the progress made by the likes of Joe Lumley, would not have happened without the change of direction Ferdinand insisted upon.

So there has been some success, albeit moderate, in terms of Rangers’ transfer dealings.

Again in defence of Ferdinand, he has clearly learned from past mistakes.

Quite simply, he should have blocked Hasselbaink’s signings, particularly in the cases of Washington and Lynch.

Hasselbaink knew Lynch from their time at Nottingham Forest. Plenty others in the game regarded Lynch as an underachiever with a questionable attitude. The signing should have been vetoed.

However, at the time, Hasselbaink was being touted as the next big thing, while many fans were dubious – and frankly misinformed – about Ferdinand’s role.

Any indication that Rangers’ bright, up and coming manager was being frustrated by an interfering director of football would not have gone down well, to put it mildly. There was therefore an emphasis on backing the manager.

It backfired and since then Ferdinand has been much quicker to keep managers in check.

Steve McClaren, for example, wanted the likes of Chris Martin and George Thorne, who played under him at Derby. No chance.

Those are just a couple of the would-be deals Ferdinand has steered the club away from in recent years. While the success or otherwise of Rangers’ signings is debated, what goes completely under the radar are the deals that have not happened. Here, Ferdinand has been a big asset to the club.

Most importantly, Les Ferdinand is not the manager, a coach or chief scout – a simple fact many of his detractors don’t seem to accept.

His role in the appointment of managers prior to the recent hiring of Mark Warburton has either been overstated or non-existent.

There were solid reasons for believing the likes of Cousins, Ngbakoto and others were sound investments. But the manager and coaching staff are largely responsible for developing players. Frustration that some of the squad did not seem to be developing as Ferdinand expected was a huge factor in Hasselbaink and McClaren losing their jobs. Holloway fared much better on that front.

Was the recruitment flawed or did successive managers fail to get the best out of promising players? That’s a matter for debate. But it’s worth remembering that Holloway and McClaren, both parachuted into the job over Ferdinand’s head, felt the club’s recruitment prior to their arrivals had been very good. And they weren’t towing a party line – that was their view.

In terms of recruitment, Ferdinand has never pretended to have all the answers.

Quite the opposite in fact. He frequently stressed to the owners the importance of improving the scouting side of the club, the need to appoint a chief scout and make other changes to what was a very poor infrastructure and recruitment operation.

The process of change he was pushing for was slow. In the meantime, Ferdinand, as Johnny on the Spot, oversaw recruitment as best he could.

There is a case for saying that given how behind the game Rangers were as a club, and how inexperienced the director of football was at the time, their recruitment in some ways wasn’t too bad. And, again, Ferdinand’s role in blocking various deals is important but goes unnoticed. His involvement has been as much about the signings that didn’t happen as the ones that did.

While Fernandes repeatedly declared during his time at the helm that the right people were finally in place, Ferdinand could justifiably now make that statement.

Rather than judge him according to the club’s transfer business up until 2016, it would arguably be fairer to judge him since the arrival of Gary Penrice as the de facto chief scout.

It was an appointment Ferdinand was arguing the case for long before it was made. He wanted to bring Penrice in to help Hasselbaink, but Penrice turned the role down because he had reservations about working with a manager he didn’t know.

The eventual appointment of Penrice’s long-time friend Holloway was one Ferdinand had no involvement in at all, but it ensured he got the scouting set-up he’d long wanted.

It was felt by that stage that there was a strong chance Penrice would be persuaded to join in any case, but the manager’s job coincidentally going to Holloway absolutely sealed the deal.

Since then, there has belatedly been the kind of change of culture Ferdinand has wanted and was supposed to be presiding over.

Luke Freeman’s market value has surely increased many times over, while the likes of Smyth and Osayi-Samuel look like decent investments.

Josh Scowen was the kind of Bosman signing other clubs were picking up while QPR were spending over the odds on average players.

Even Matt Smith, who has no sell-on value and isn’t everyone’s cup of tea, has brought value for money given the impact he has made for the relatively modest transfer fee involved in signing him.

And Angel Rangel, without a club when contacted by Penrice after Darnell Furlong suffered a knee injury last summer, proved to be an inspired short-term option when there was very little wriggle room financially.

Penrice became much less influential under McClaren and could well become sidelined now, as very few managers are as hands-on as Warburton when it comes to recruitment.

But as the appointments of Penrice and now Warburton were very much driven by Ferdinand, it’s fairer to assess his competence by what has happened since 2016 and what happens under the new manager than what occurred along the way.

That’s not to say there haven’t been mistakes. There certainly have been. And they’ve been expensive.