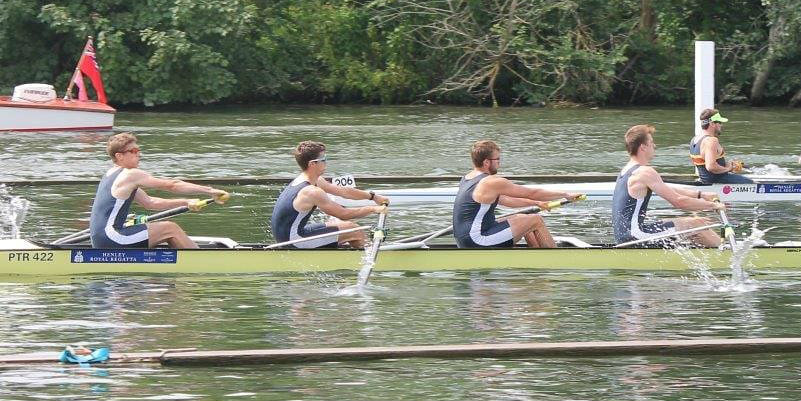 Putney Town Rowing Club were celebrating despite defeat at Henley Royal Regatta on Thursday, having made it to the second day of racing for the first time in 39 years.

You can take advantage of a Coral sign up offer and place bets on rowing and various other sports.

The club, based in Mortlake since the 1990s, has regularly raced at Henley over the last decade but went a step further with Wednesday’s victory over City of Cambridge in the Wyfold Challenge Cup for club coxless fours.

The crew of Alex Duncomb, Sam Russell and brothers Sam and Jamie Diserens were slightly down off the start against Cambridge but had worked their way back to a slight lead by the Barrier – a third of the way up the course – and went on to triumph by just over a boat length.

“What a great race! I couldn’t be prouder,” said coach Julie Lewis afterwards.

Thursday saw them defeated by one of the event favourites, Bayer Leverkusen from Germany, but club captain Peter Jones said: “Today was in some ways the prize after yesterday’s race. They just wanted to have a good row, with no expectation or pressure.”

No one at the club can quite remember what happened to the crew that raced in 1979, although records show a victory over Burton Leander RC, who were disqualified. The club did not qualify for the regatta again until 2008. They last reached Henley finals in 1957 and ’58.

For Jones this is the culmination of five years’ work since he took over as captain. The club was one of the first to run a “Learn to Row” programme for adult beginners, and Jamie Diserens in the two seat is a product of that.

However, the club has also managed to recruit oarsmen who have rowed before at school and university, boosting their experience level. In the past those rowers might have gone to higher-profile clubs nearby.

“The challenge now is to make sure that this isn’t a one-off,” said Jones. “We will go crazy on recruitment in the next few months.

“We’re looking for good university rowers who don’t want to train like crazy but want to do some good rowing and race at Henley.”