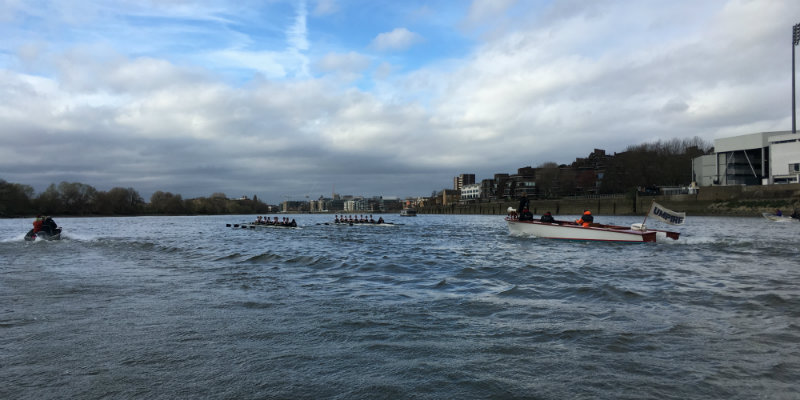 Oxford’s women were pleased with the way they handled the rough water of the River Thames in London in their final fixture before the Cancer Research UK Boat Races, but they will need to step up a level to stop Cambridge ending a four-year losing streak in two weeks’ time.

The dark blues of Oxford won an epic clash last year, when the Cambridge boat almost sank under Barnes Bridge, although they managed to row on to the finish.

None of last year’s winners return in 2017, though, and Cambridge are seen by many as favourites to win the third Women’s Boat Race held on the same day and over the same course as the men’s event.

On Sunday, Oxford saw similar rough water to last year. Helped by extra tweaks made to their boat in light of last year’s conditions, they battled through it in a fixture against Molesey Boat Club.

“It was good to go out and have a race practice when it was really rough. I think they handled it well, which is good as we haven’t had a lot of time in those conditions,” said their coach Alison Williams.

The dark blues were far from convincing, though, having changed their line-up in the days since last week’s official crew announcement, with Canadian international Emily Cameron moving into the stroke seat.

Oxford and Molesey won one race each. The students got the better of a piece from the Boat Race start in Putney to the end of Chiswick Eyot – just past the race’s half-way mark – by just over two boat lengths.

However, the crews were level for the first part of the clash, until the water flattened and the bend turned in Oxford’s favour.

Molesey struck back in a short second race from the Bandstand in Barnes to the race finish at Chiswick Bridge, taking a slight advantage through Barnes Bridge, where water became particularly rough and eventually delivering a one-length win.

“We’ve been fortunate this year with good weather in the Tideway,” added Australian Williams, who took over as Oxford’s head coach at the beginning of the season.

“We probably have less experience in the last few seats than we had last year but they have a lot of talent and it’s just a matter of trying to be able to keep it together on the day.

“A lot comes down to what the competition is like. We haven’t raced them directly but we see them racing other crews.

“You do your comparisons but you can never tell until you actually get side by side with one another.”

Cambridge will welcome three former Boat Race competitors back in their crew on 2 April and also boast Irish lightweight Olympian Claire Lambe in their line-up.

They beat a similar Molesey crew by 35 seconds in the Women’s Eights Head of the River time trial last weekend.