James Cracknell rated Cambridge’s Boat Race a “seven out of 10” but it was enough to give the light blue men back-to-back victories for the first time in 20 years.

And the whole of Cambridge University’s rowers were celebrating after victory for the women’s crew and both reserve boats in their races secured a 4-0 sweep on the day for a second straight year.

Double Olympic champion Cracknell, at 46 the oldest Boat Race competitor ever by eight years, raced in the two seat of the Cambridge blue boat, who stormed into a length’s lead within the first mile of the race from Putney to Mortlake.

However, they could not extend their lead in the middle third of the course and had to hang on from Barnes Bridge to the finish as Oxford put in a tremendous sprint on the inside of the bend.

“We said as long as we have a seven out of 10 that’s acceptable. To get to that point with the pressure around it was very satisfying,” said Cracknell on the beach at Mortlake afterwards.

“To get ahead by that much that early was good. They hounded us all the way. We didn’t pull away but we didn’t let them get any closer.”

Cracknell was watched by Sir Matthew Pinsent, who rowed alongside him to Olympic gold medals in Sydney in 2000 and Athens four years later.

“When it’s that close coming around the Barnes bend you think maybe we should have some 23-year-old legs in there rather than 46-year old,” said Pinsent, who was umpire for the men’s reserve race.

“I was watching him very closely and I thought I’ll know when he packs up his bags and goes home but he didn’t.

“I don’t think in the history of the Boat Race [a 46-year-old taking part] will ever happen again.”

Cracknell is old enough to remember the last time Cambridge won back-to-back races in 1998 and ’99 but today’s light blue cox, Matthew Holland was born in 1998.

The former Westminster School pupil played a crucial role as his steering in the first third of the race saw him warned multiple times by umpire Rob Clegg and led to a clash that could have seen Cambridge disqualified or hampered their progress.

However, Holland insisted he was not worried during the clash, using Freddie Davison in the seven seat to stroke to boat while Polish strokeman Natan Wegrzycki-Szymczyk got his blade clear.

“Our rhythm was very strong at that point and I had full confidence. I tried to do as I was told but this is the Boat Race and clashes are part of the process,” said Holland.

“I was pretty happy with my position. Ultimately it’s my job to try and push and the umpire’s job to warn me away.”

Victory came more easily for the Cambridge women’s crew an hour earlier, after they established a solid rhythm quickly, had a length’s lead by Craven Cottage and extended that to five lengths by the finish.

They were three seconds outside the course record at Chiswick Steps but without being pushed hard they could not hold that pace in the second half, finishing in 18 minutes 47 seconds – 14 secs outside the mark they set two years ago.

Cox Hugh Spaughton was watched by friends at family at Westminster School boathouse, where he also took up the sport, just past the Boat Race start line.

“The Mile Post was the first point where we couldn’t really see them. I just thought, this is a good start,” he said.

“Previous coxes have told me it’s unbelievably noisy off the start and it was unreal, so loud.

“It’s easier to settle into a rhythm when you’re up but we delivered what we set out to do. We had a solid plan and we went out and executed.”

Cambridge’s reserve men Goldie won their race against Isis by a length while the women’s reserves, known as Blondie, beat Osiris by five lengths.

“You only see the Blue Boat but there’s so much going on behind the scenes,” said Spaughton. “Every day down at Ely [the Cambridge training base] they will be pushing us. We would be nowhere near as fast as we were today without them.” 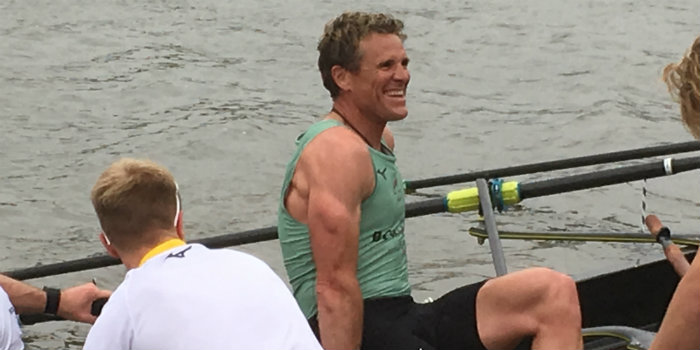