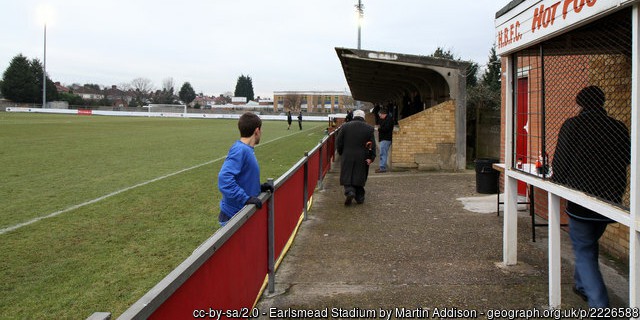 After a year that threatened the existence of several non-League football clubs, this week saw a chink of light creep into what has been a dark Covid-19 tunnel as many players finally returned to training.

Although the four top divisions in English football and the National League have continued to play, leagues at the Step Three level of the football pyramid and below were forced to curtail their seasons in October.

The Step Two National League South and North divisions also had their seasons annulled last month, despite clubs in the southern divisions voting to carry on – unlike their counterparts in the north.

This week saw uproar in non-League circles when fines were handed out to 17 clubs, ranging from £40,000 to £1,400, for not fulfilling fixtures before seasons were cancelled, a move that led to a vote of no-confidence being tabled against National League chief Brian Barwick and his board.

Despite that ongoing turmoil, Step Three clubs from Monday were allowed to welcome back their players for early pre-season training after the first stage of the government’s lockdown relaxation took effect.

Steve Baker, manager of Southern League side Harrow Borough, who last played on October 26, admits the relationship between clubs and the league decision-makers is at all-time low, but is hopeful the 2021/22 campaign will be able to kick-off on August 14 with fans in attendance.

“The whole situation has been so hard for everyone around the country and non-League football is no exception,” Baker said.

“But we are getting the lads back in on Thursday and we all can’t wait for it.

“I actually put up a poll on Twitter asking whether we should do hard running or World Cup doubles and you can probably guess what the overwhelming response has been!

“Players even at our level are so much better at looking after themselves than when I played, but no amount of running or bike work can match getting the balls out.”

Baker has been at the helm at Earlsfield for six years following stints with Chipstead, Walton & Hersham and Egham Town – where he began his managerial career after injury ended his playing days in the late 1990s.

He came through the junior ranks at Tottenham before moving on to Brentford, who he left in 1992 to play for hometown team Hayes, where he set up the decisive goal that took the club to the Conference National (National League) for the first time in 1996.

Unlike many other clubs, Harrow were in a position to apply for the government’s furlough scheme to help keep themselves afloat during the lockdown, due to the PAYE-type contracts they award to players, but have still been left counting the cost of lost revenue.

“We started the season and played seven games with crowds and, because we average about 250-300 each week, social distancing was never really an issue at our ground,” Baker said.

“Many fans at our games will go for a drink in the bar after the game or have a pint during it, which brings money in to the football club.

“The clubhouse is also used throughout the year for wedding receptions, parties – that kind of thing, which is the lifeblood for many clubs at our level.

“Once that wasn’t possible when indoor areas had to close, the clubs voted to stop the season, as we simply can’t survive on gate receipts alone.”

For many years Harrow were the stalwart member of the Isthmian League, which contains clubs in and around the London and M25 region.

But following a major restructuring of the National League system in 2004, Harrow, along with London rivals Hendon and Hayes & Yeading, found themselves in the Southern League Premier South division.

That decision has added to these club’s financial burden, with long away trips to places such as Truro, Tiverton, Weston-Super-Mare, Dorchester and Taunton needing to be factored into the annual budget.

“At this level of football it is a tough ask,” Baker said.

“Although it’s semi-professional level and my players all hold down jobs, they have to factor work in around their football and often have to play twice a week in addition to training.

“We may have a game on a Saturday in Poole or somewhere and on Tuesday it’s an away trip to Truro.

“That will mean lads are doing a couple of hours’ work and then it’s off to Cornwall at lunchtime and getting home at two or three in the morning and being up for work first thing again.

“Players at this level shouldn’t be asked to do that and the money we can offer them is not that great.

“But we have managed to look after them because we qualified for furlough.

“We have been burned before, handing out longer contracts out, and with the squad we have now of about 16 players, they only need to give seven-days’ notice if they want to move on.

“If a player can get more money elsewhere then fair enough. I say when they sign: ‘We don’t pay the best but you will definitely play here and can put yourself in the shop window’.

“I like to think because we have been able to look after them in lockdown and a few of them may stay on for a bit a longer with us.”

England and Burnley goalkeeper Nick Pope and QPR winger Albert Adomah are two players who have used Harrow as a stepping stone to greater things and Baker is keen to keep fostering links with all four of the professional clubs in the west London area.

“We had two lads from Fulham last season who were top class for us,” he said.

“One is a defender, Ben Tricker, who we have managed to keep after he was released by Fulham, and the other was a goalkeeper, Luca Ashby-Hammond.

“He plays for the England Under-19s and he was brilliant for us, so solid and I would love to see him hopefully make it as he is a great lad and a very talented goalkeeper.

“As a club we have had always historically had links with Brentford and QPR and I would like to do so again as it’s massive for us to get even their Under-23s or B teams down here for pre-season games and perhaps even see if we can get some of young players on loan.

“That is something that can benefit us massively and also help their lads develop too as it’s widely felt across the game that the often the Under-23s academy leagues are not competitive enough for young players to learn the game.”