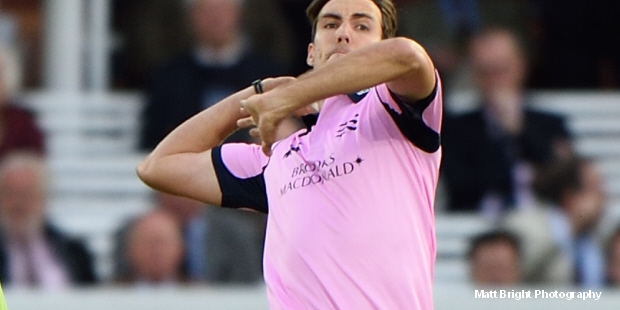 Finn finished with 4-24, while Tim Southee and Tom Helm took three wickets apiece as the West Country side were demolished for just 100.

Middlesex’s victory – which came with more than four overs to spare – maintained their outside chance of scraping into the knockout stages with one game remaining.

Put in to bat, Middlesex laboured through the initial stages of their innings and lost John Simpson (8), who skied David Payne to backward point at the start of the fourth over.

Paul Stirling burst into life by clubbing Payne for four successive boundaries and shared a second-wicket partnership of 62 with Stevie Eskinazi.

Former Middlesex spinner Tom Smith boosted the visitors with two wickets in three balls as Stirling (44) was caught on the boundary and Eoin Morgan reverse-swept straight into the hands of Kieran Noema-Barnett for a duck.

Eskinazi (47) and Adam Voges (38) rebuilt the innings with a patient stand of 66, although they were unable to gather much momentum as the home side clambered to 161-5.

Southee (3-9) struck an early blow in the Gloucestershire reply as visiting skipper Michael Klinger (0) slashed him to slip and Finn followed that up with two wickets in an over, removing Ian Cockbain (13) and Cameron Bancroft.

Benny Howell (34) and Jack Taylor (31) restored some pride for the visitors with a brisk partnership of 64 – but Finn had both batsmen caught behind in the same over and Southee and Helm quickly wrapped up proceedings.