The 10 stats that show why Chelsea are top 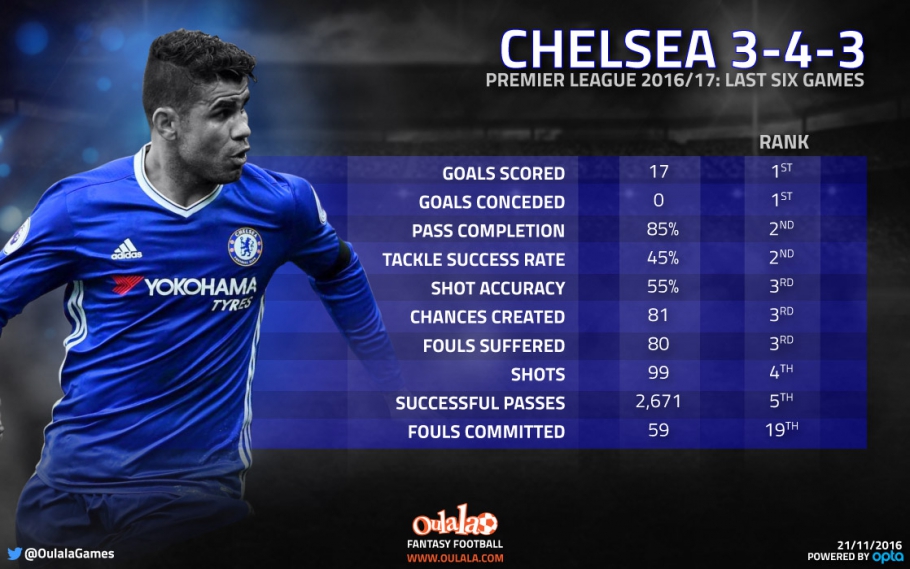 Six straight wins, over Hull City, Leicester City, Manchester United, Southampton, Everton and Middlesbrough, have seen Chelsea rise from eighth in the Premier League at the end of September to top spot by mid-November.

Back-to-back defeats by Arsenal and Liverpool prompted Blues boss Antonio Conte to switch to a 3-4-3 formation, and it’s a system that appears to have benefited every player.

The reshaped defence has now gone 590 minutes without conceding a goal in the Premier League, and with the extra protection at the back, it has allowed the likes of Eden Hazard to occupy more attacking positions.

But as a team, how have Chelsea fared during this superb six-game run? Using Opta’s stats, Fantasy football game Oulala.com has highlighted 10 stats that sum up the Blues’ dominance since switching to a 3-4-3.

Chelsea (17) have scored three more goals than any other side in the Premier League since 1 October – Liverpool are next highest with 14.

2. Case for the defence

The Blues are the only team to have kept six clean sheets during this period. Stoke and Middlesbrough have conceded the next fewest goals (four).

Only Manchester United (87%) have outperformed Chelsea (85%) for pass completion during the last six games.

4. Up for the challenge

Stoke are the only team to have won a higher percentage of tackles (47%) than Chelsea (45%).

The 81 chances that Antonio Conte’s side have created has only been topped by Liverpool (87) and Manchester United (83).

Bournemouth (86) and Manchester City (81) are the only teams to have provoked more fouls than Chelsea (80) in the last six league games.

The 99 shots that the Blues have registered has been surpassed by just three clubs, Liverpool (108), Manchester United (106) and Manchester City (101).

Just four teams can boast more successful passes per game in their last six games than the league leaders’ 445. They are Liverpool (478), Arsenal (473), Manchester City (472) and Manchester United (459).