Sarri says he deserves to stay as Chelsea boss

Maurizio Sarri says he deserves to be kept on as Chelsea boss after ending the season with a trophy as well as a return to the Champions League.

Sarri will speak to the club’s hierarchy in the next 48 hours amid reports that he could be on his way out.

The Italian, who has been linked with the manager’s job at Juventus, endured a troubled spell during his first campaign as Blues boss.

He was jeered by fans, heavily criticised by pundits, and the low point was a 6-0 humiliation at Manchester City in February.

But Sarri believes a corner was turned after that debacle and he wants to stay at Stamford Bridge, where he has two years remaining on his contract.

He guided Chelsea back to the Champions League via a third-placed finish in the Premier League and was unfortunate not to win the Carabao Cup, losing on penalties to City in the final.

And Chelsea ended the season in style, thrashing Arsenal 4-1 in an all-London final in Baku to win the Europa League, securing Sarri’s first trophy as a manager.

He will now discuss his future with Chelsea – but is in no doubt he has done enough to be retained.

“I think so but it’s only my opinion. My opinion is not enough,” Sarri said.

“I have to speak to my club. I will speak to the owner or director, I don’t know. But we need to speak, like in every club at the end of the season.

“We need to know what the club can do for me and what I can do better for the club.

“But, I have a contract, so at the moment we are talking about nothing.”

He added: “I love the Premier League and I am lucky that I am at Chelsea – one of the best teams in the best championship in the world.

“So at the moment I am happy. But of course I want to know if the club is happy – if we can improve.

“The trophy is very important for us because our feeling was we deserved to win.

“We went in trouble in January and February and then we reacted. And in the Premier League it is not easy to react, because the level is really high.

“At the end we got to the Champions League through the Premier League – not easy.

“We played the final of the League Cup and qualified by beating Tottenham and Liverpool, who are the finalists of the Champions League. Then we lost in the final on penalties against Manchester City.

“Something changed at the beginning of February, I think. We lost 6-0 in Manchester against City but we started something different.”

If Sarri stays he will almost certainly be without Eden Hazard, who confirmed after the final that he has told Chelsea he wants to leave. The Belgian is expected to complete a move to Real Madrid.

Sarri paid tribute to Hazard and suggested he has known for some time that Chelsea’s talisman wanted to move on.

“I knew that he wanted to leave, of course. But I wanted to respect his decision.” 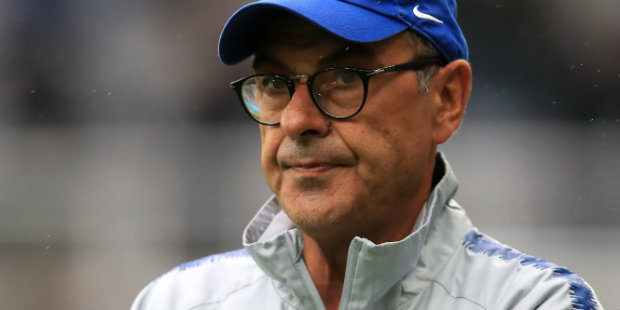