Hazard will wait to decide his future

Eden Hazard has admitted he could wait until the end of the season before making a decision on his long-term future.

Hazard passed 100 goals for Chelsea with his brace in the Blues’ 2-1 Premier League win at Watford on Boxing Day.

The 27-year-old then revealed immediately he wants to become a Chelsea “legend”, leaving fans excited about the prospect of the Blues holding onto the Belgium star for years to come.

His current Chelsea deal expires in 2020 and he has been consistently linked with a move to Real Madrid, and the in-form Hazard insisted he is in no rush to resolve his long-term plans.

Asked if his desire to go down in Chelsea history means he could stay at Stamford Bridge for the long haul, Hazard replied: “To be fair I’m just focused on the pitch, and we’ll see at the end of the season.”

Hazard’s direct hand in 19 goals in 18 Premier League games this term is the highest of any individual.

Chelsea’s talisman now has 10 goals and nine assists at the season’s halfway point, and has found himself operating as a ‘false nine’ in recent weeks. 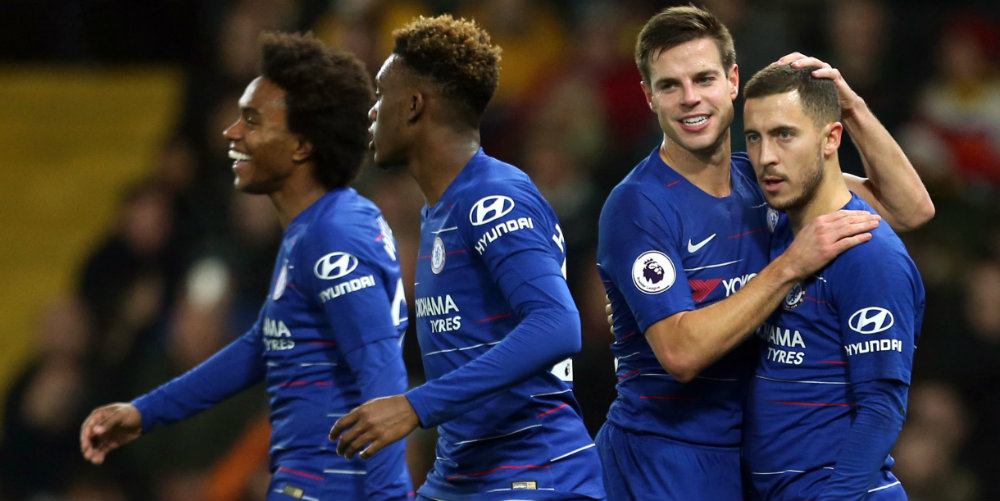 While reiterating he feels most comfortable as a winger, Hazard again vowed to keep on slotting in wherever manager Maurizio Sarri needs him most.

Despite passing that century mark for Chelsea goals at Watford, Hazard revealed he is not yet sated when it comes to scoring.

He added: “If you score 100 you want to score more, so I’ll try to score more goals. I’ve scored a couple of good ones through the years, so I can’t choose my favourite.”