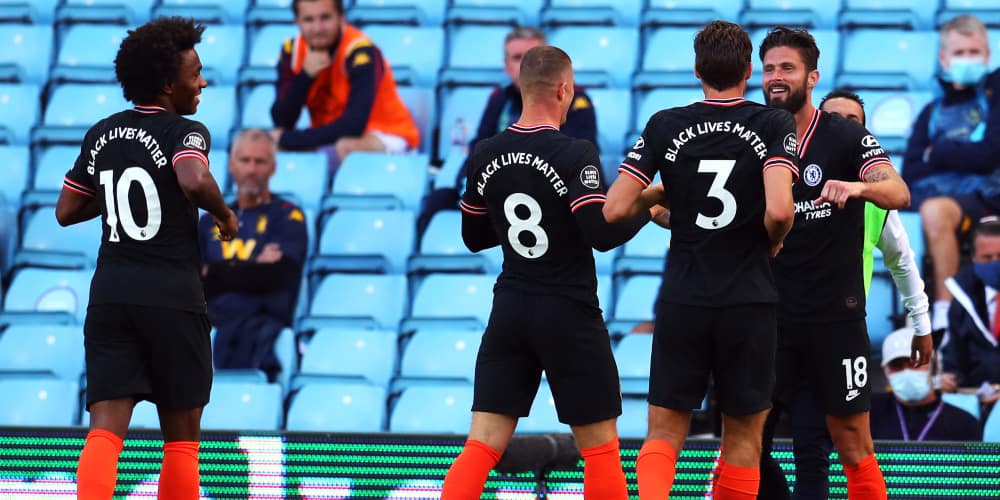 Chelsea resumed their Premier League season with a fine comeback win against Aston Villa. Here’s how we rated each Blues player in the 2-1 victory at Villa Park.

He made a decent save from Anwar el Ghazi’s 20-yard strike and had no chance with Kortney Hause’s miscued close-range effort.

The Spanish defender was heavily involved in attack throughout and although he will feel partly responsible for Villa’s goal when he failed to attack the far-post delivery, he more than made amends with two fine crosses which led to goals.

He was guilty of ball-watching when Villa went ahead but otherwise impressed, looking strong in the air and composed on the deck.

A standard mix of rugged defending with the odd shaky moment and some over-ambitious passing. He was rarely troubled but one notable second-half lapse could easily have led to a goal.

Alonso took up some great positions in attack, but too often failed to make the most of them.

The England midfielder almost scored with a fierce strike in the first half and was bright and effective and always likely to set up a goal, as he did with his direct running for Olivier Giroud’s winner.

An influential figure in the first half as Chelsea completely bossed the game, Kovacic was a whisker away from opening the scoring with a rasping strike from the edge of the box but was taken off within 10 minutes of the restart.

Another who looked sharp and full of running but his final ball was not always up to scratch. He almost scored with a fine late shot from the edge of the box that was tipped over.

It was wonderful to see Loftus-Cheek back after more than a year, but he was tentative, understandably off the pace and way off his best. He struggled to get involved although he was close to sliding in Mount’s drilled first-half cross.

Giroud’s goal was taken with the poise you would expect from the classy striker, swivelling neatly and firing home a vital winner, albeit with the help of a deflection. His link-up play was also of the usual standard and he fully justified his start.

A brilliantly controlled finish soon after coming on was the perfect start and his energy and urgency provided a welcome lift.

Like Pulisic, Barkley’s dynamism was important and the double introduction was a smart move by boss Frank Lampard.

He had little time to or chance to make an impact.