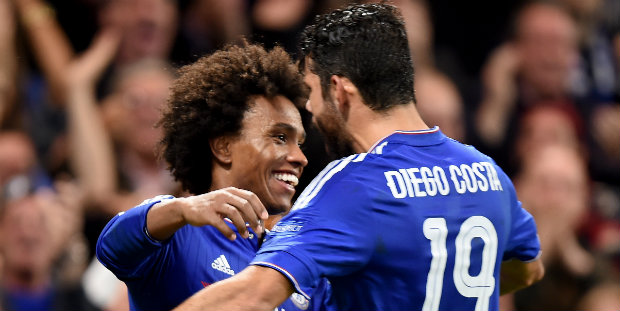 The Spaniard, in for Oscar, took full advantage of his recall – and some generous defending – to help the Blues easily dispatch a poor Newcastle side.

Diego Costa, playing in a facemask to protect a broken nose, opened the scoring early on when he timed his run perfectly to guide Willian’s ball into the far corner.

Then Newcastle left-back Rolando Aarons played a casual pass on halfway, allowing Pedro the chance to run to the edge of the box before firing home.

The home side’s dominance was underscored by their third goal, as Costa picked up Cesc Fabregas’ lofted pass before threading the ball into the path of Willian, who was left with a simple finish.

The only concern for Chelsea in a comfortable first half was when captain John Terry limped off after 36 minutes.

Although Newcastle began brightly after the break, with Aleksandar Mitrovic firing narrowly wide, their porous defence presented Chelsea with their fourth.

Steven Taylor allowed another excellent flighted ball from Fabregas to drop over his shoulder and Pedro nipped in before clipping a shot beyond Rob Elliot.

With Tuesday’s Champions League tie against Paris St-Germain in mind, Hiddink allowed Costa a breather and his replacement Bertand Traore scored his first league goal for the club when he turned in Cesar Azplicueta’s cross.

Chelsea weren’t able to keep a clean sheet, though, as Andros Townsend fired in a consolation from the edge of the box in injury time, but it is the Blues’ biggest league win since the 5-0 thrashing of Swansea last January.