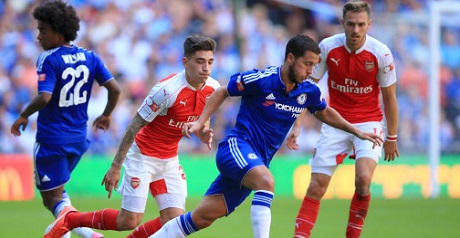 Chelsea will be looking for their first home league win of the season when they take on Arsenal this weekend. Here are five potential battles we think could be crucial in the match at Stamford Bridge.

Cesc Fabregas v Francis Coquelin
After a poor start to the season, Fabregas’ position is under scrutiny ahead of the match against his former club. Coquelin, on the other hand, has developed impressively and is likely to have a key role in midfield for the visitors.

Pedro v Nacho Monreal
If he passes a fitness test, Pedro is likely to be pitted against his fellow Spaniard in what could be an intriguing battle. The last time they met was in January 2013 when Barcelona won 3-1 at Monreal’s Malaga. Coincidentally, Pedro was replaced that day by Alexis Sanchez, now of Arsenal.

Nemanja Matic v Mesut Özil
If Matic, who was left out for the midweek game against Maccabi Tel Aviv, is recalled, he will have an important job up against Özil, who has set up two of Arsenal’s five Premier League goals this season. Matic, so outstanding last season, will need to improve on some of his recent displays.

John Terry v Theo Walcott
Arsenal boss Arsene Wenger says he is undecided over whether to start with Walcott or Olivier Giroud up front. Either forward could have a field day if Chelsea fail to improve on their recent defending. They have been particularly troubled by pace so far this season, so perhaps Walcott will get the nod.

Diego Costa v Petr Cech
Cech can expect a hero’s welcome and to be kept busy on his return to the Bridge. A big London derby would be the perfect time for Costa to return to form in the Premier League.