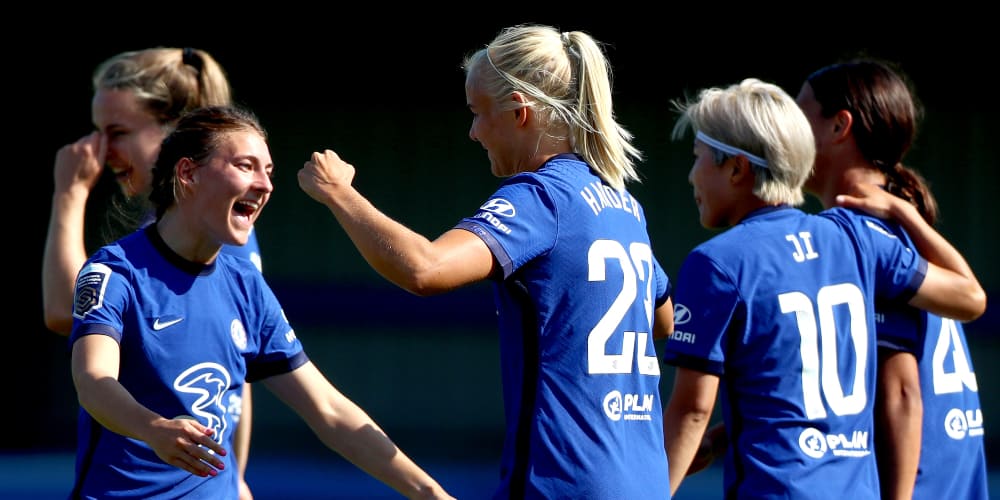 The nine goals came from nine different scorers at Kingsmeadow as the hosts bounced back from their 1-1 draw with Manchester United on the opening weekend.

Flo Allen’s missed interception after 14 minutes led to Chelsea’s first of the afternoon as Fran Kirby found space inside the area to shoot low under Sophie Baggaley.

The Blues’ second came when Ji So-Yun was scythed down in the area after 30 minutes, with Maren Mjelde making no mistake from the spot – dispatching into the top right corner.

Cuthbert then turned goalscorer on 36 minutes, receiving the ball 25 yards out before smashing in a fierce strike for Chelsea’s fourth.

Number five for Chelsea arrived just before half time as Cuthbert provided the assist again, whipping a cross in for Millie Bright to head past Baggaley with ease.

Beth England then found the net with 25 minutes remaining after Baggaley spilled a cross which the Chelsea striker smashed in from close range.

Minutes later, substitute Pernille Harder made an instant impact, weaving inside City’s penalty area and striking a shot which Baggaley saved, only for Niamh Charles to convert the rebound.

Chelsea then produced a rapid passing move down the left flank for their eighth goal with Sam Kerr driving a low cross for Harder to tap in for her first Chelsea goal on 72 minutes.

Ebony Salmon had Bristol’s only attempt on goal after 81 minutes, cutting inside from the left and curling a shot high over the bar from the edge of the area.

Chelsea then made it nine with five minutes left on the clock as Kerr got her just rewards for a fine individual display, firing a low strike past Baggaley from six yards out.

Chelsea manager Emma Hayes said: “I thought the team mirrored the training week we had. I thought we were consistent in training and you saw the quality in depth today.

“The fact there were nine scorers shows the diverse players we have in our group. Definitely happy with a clean sheet and happy with no injuries.

“I’m happy for all my players to score. Beth England had a wonderful season last year and I think it’s wonderful she could get on the sheet going into the international break.

“I know you have to get three points first then with as many goals as possible, I’m not sure how much that will make a difference in the season.

“I want the best players playing here. We don’t need to have all of them to enjoy them. I just have a preference to have long term players rather than short term.”

To follow the action and sign up for The FA Player’s live Barclays FA Women’s Super League coverage visit womenscompetitions.thefa.com