Smith suggests he will be staying at Brentford 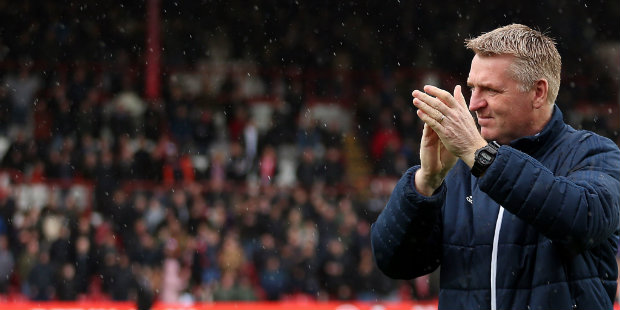 Brentford boss Dean Smith poured cold water on speculation over his future to give the broadest hint yet that he will still be in charge at Griffin Park next season.

Smith was speaking after his side’s 1-1 draw at home to Hull saw them finish the Championship season in ninth place, six points off the play-offs.

He said: “There’s always going to be speculation about managers or players when a side does well, particularly when it’s a club our size.

“But there is a long-term plan at this club and I’m acutely aware of what I have got here and that is always a big factor. It is a proper family club – in fact I was shocked to see my daughter walk out for the lap of honour with me.”

The 47-year-old, rumoured to be a target for West Brom, added: “It is a good football club and I’m enjoying my time here.

“On the playing side, I have no idea if we will lose players in the summer, but they have developed as young men individually and as a group. It’s a privilege to be their head coach.

“If you leave it’s not always rosy and the grass isn’t always greener. There has to be a good reason to leave rather than moving on all the time.”

Smith made seven changes to his side for the visit of Hull, who themselves made five.

Home goalkeeper Luke Daniels made his first start of the season but could do little about Jarrod Bowen’s goal on half-time that cancelled out Sergi Canos’ opener. He also denied Harry Wilson from the spot after bringing down Fraizer Campbell following a sloppy clearance.

Smith said: “He has done well and deserved his spot for pushing Dan Bentley all season, but then so have the other boys in the squad who all came in today and slotted into the system we have.

“Unfortunately, our decision making in the final third was not quite there again and that’s been the story of the season. We had a number of opportunities but didn’t take them.”