Chris Robshaw insists he harbours no thoughts about what might have been as he watches England’s bid for World Cup glory from afar.

Four years ago, the Harlequins skipper was leading the home nation’s tilt at the trophy on home soil – a tournament which ended in disaster with early pool elimination, with Robshaw having to live with a fateful late decision to go for a try rather than a penalty shot in the defeat to Wales at Twickenham.

Still only 33, he might have hoped for a shot at redemption, but faded out of Eddie Jones’ plans, along with Mike Brown and Danny Care.

He has had see team-mates Kyle Sinckler and Joe Marler board that plane to Japan while he stays at home.

But the back row insists he carries no lingering regrets or envy about the players who are on the verge of the biggest moment in their careers in Saturday’s World cup final against South Africa.

He even names one of the men in his position, flanker Tom Curry, as one of the stand out stars in the Far East and says he was simply enthralled by last weekend’s semi-final win over the All Blacks.

“Of course you just want to see the guys do well,” he said. “I’m there to support them now. I’ve been out of that mix for over a year now, so now I’m very much a supporter.

“I’ve got a lot of friends who are there who of course suffered four years ago and you want to see them go there and do well and so far they are making the country extremely proud.

“We were driving in as the game was finishing and you could see all the pubs filling out [with fans] and it’s brilliant.

“I think they were brilliant. I think Tom Curry’s been England’s player of the tournament. I think he’s been absolutely outstanding. To give that much of a convincing display against the New Zealanders was outstanding.

“It started the way they faced the Haka. New Zealand only scored from one mistake by England and they didn’t look like scoring either.

“Before the tournament, I thought it would be between South Africa and England. I had a feeling that they would do something special and I think they will.”

England’s loss is very much Harlequins’ gain. On Saturday, Robshaw – twice Premiership player of the year, in 2009 and 2012, when Quins won the league – made his 279th club appearance.

It came in a 22-17 win against Bristol Bears in the first home Premiership match of the season and even if it looks unlikely he will add to his 66 England caps, he proved he still has much to offer his club.

And he admits getting a first win of the campaign was important, even if it came in a scrappy contest.

Robshaw said: “Whenever you play early in the season, you want to get a win so you can relax a little bit, whereas if you go two or three games without that win, all of a sudden you start to judge yourself, you start to doubt yourself. And you get a bit nervous, there’s no denying that.

“Not every game’s going to be the best game ever but it’s important to come away with the right result or pick up points here and there and it’s an important day for us.

“We got a win and we go off to [Northampton] Saints next on Friday, which will be another good test for us. It should be a good game.” 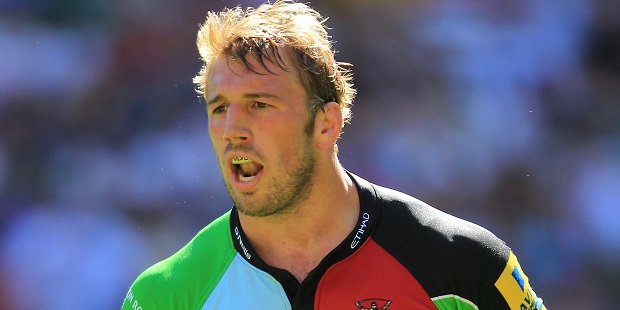